Home » Light Therapy: Good for What Ails You?

Light Therapy: Good for What Ails You?

Edmund S. Higgins, MD.
From The Carlat Psychiatry Report
Issue Links: Learning Objectives | Editorial Information | PDF of Issue
Edmund S. Higgins, MD. Clinical associate professor, Psychiatry and Behavioral Sciences, Medical University of South Carolina. Dr. Higgins has disclosed no relevant financial or other interests in any commercial companies pertaining to this educational activity.
There are several lifestyle changes with broad health benefits that we often encourage in our patients. Exercise, a healthy diet, sleep hygiene, and supportive social connections are near the top of the list, and bright daytime light might be worth adding. Light therapy is a standard treatment for seasonal affective disorder, and in this article we’ll look at other potential uses for this novel treatment.

An expanding role in depression
In 1984, Norman Rosenthal and colleagues at the NIMH coined the term seasonal affective disorder (SAD) (Rosenthal NE et al, Arch Gen Psych 1984;41(1):72–80). They described patients who, year after year, had depression in the fall and winter that cleared up in the spring. The authors were able to show that extending the daylight hours with artificial bright light during the winter had an antidepressant effect. That pilot study has since been confirmed in over three dozen controlled trials, most of which used a dim light box as the placebo. Light therapy worked as well as an antidepressant in head-to-head studies and is considered first-line in the treatment of SAD (Geoffroy PA et al, Sleep Med Rev 2019;48:101213).

Sleep and circadian rhythms
Light regulates the circadian rhythm, and morning light therapy helps night owls with delayed sleep phase disorder fall asleep earlier. In primary insomnia, it improves daytime energy, boosts sleep quality, and helps patients fall asleep faster (van Maanen A, Sleep Med Rev 2016;29:52–62). Some of the most robust findings for light therapy on insomnia have been in older adults with cognitive impairment, dementia, or Parkinson’s disease. There, light therapy was shown to improve sleep as well as mood and behavioral disturbances, but had only a limited effect on cognition and quality of life (Cibeira N et al, Geriatric Nurs 2020;41(6):970–983).

When treating sleep disorders, timing is important, as the therapy works best delivered early in the morning for 30–120 minutes, ideally just after the circadian drop in temperature that occurs around 4:00 am. Brighter light (5,000–10,000 lux) is more effective for sleep. This morning light can be augmented with evening darkness (see Feb 2019 TCPR’s interview with Jim Phelps on blue light–filtering glasses and dark therapy for insomnia).

Shift workers also benefit by turning on a light box in their darkened mornings and creating an artificial evening at the end of their day with blackout curtains and blue light–filtering glasses. Similar manipulations of light and darkness can also alleviate jet lag (see April 2019 TCPR’s “Ask the Editor” for a jet lag protocol). 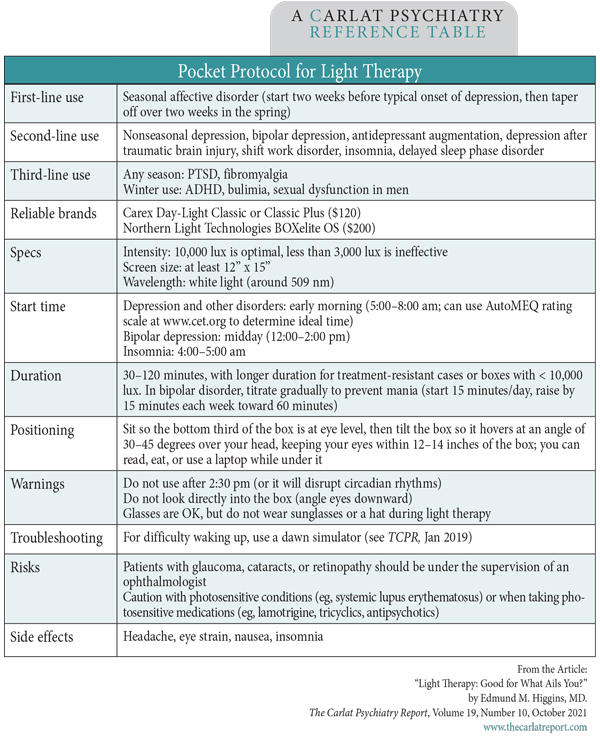 ADHD symptoms are also known to worsen in winter in some patients. In an open label trial of morning light therapy in the fall and winter, light therapy improved objective and subjective symptoms of ADHD. These benefits were independent of mood and instead were associated with a shift toward earlier bedtimes, which is interesting as one in four patients with ADHD have delayed sleep phase disorder (Rybak YE et al, J Clin Psychiatry 2006;67(10):1527–1535).

Recently, morning light therapy reduced core symptoms of combat-related PTSD in a placebo-controlled trial where the treatment was delivered across all seasons. Unlike the ADHD study, the benefits in PTSD were unrelated to changes in sleep or circadian rhythms (Youngstedt SD et al, Mil Med 2021;usab014).

Outside of psychiatry, light therapy improved back pain and fibromyalgia in small controlled trials, an effect that may be mediated by its sleep benefits. Although metabolic health is influenced by circadian rhythms, light therapy recently failed in the first randomized controlled trial in type II diabetes (Brouwer A et al, Diabetes Care 2019; 42(4):529–538).

TCPR Verdict: Light therapy improves sleep and circadian rhythms and is a first-line treatment for seasonal affective disorder. It is worth considering for nonseasonal depression, antidepressant augmentation, bipolar depression, and depression in traumatic brain injury. It may also improve PTSD, ADHD, bulimia, and sexual dysfunction in men, but here it is best reserved for patients who prefer natural treatments or do not tolerate conventional ones.

Can TMS Turn on the Switch?