Home » How to Use SAMe in Clinical Practice

How to Use SAMe in Clinical Practice

Garrett Rossi, MD.
From The Carlat Psychiatry Report
Issue Links: Learning Objectives | Editorial Information | PDF of Issue
Garrett Rossi, MD. Inpatient/consult attending psychiatrist, AtlantiCare Regional Medical Center, Pomona, NJ. Dr. Rossi has disclosed no relevant financial or other interests in any commercial companies pertaining to this educational activity.
S-adenosylmethionine (SAMe) is an over-the-counter supplement that’s usually lumped with the complementary and alternative (CAM) therapies in psychiatry. However, it is one of a few CAM therapies with efficacy that rivals standard medications. SAMe raises levels of serotonin, dopamine, and norepinephrine, acting in some ways like the fabled triple reuptake inhibitor that the pharmaceutical industry has toiled to develop. In this article, I’ll describe how to use SAMe.

How it works
SAMe occurs naturally in the body. On a physiological level, it’s a methyl donor involved in the production of neurotransmitters and hormones including dopamine, serotonin, and norepinephrine. Vitamins B12 and folate are essential to SAMe production, which is part of the reason that deficiencies in these vitamins lead to depression and dementia. SAMe has the added benefit of increasing uptake of phospholipids into nerve cell membranes, which enhances their fluidity and improves neurotransmission. SAMe also possesses antioxidative, anti-inflammatory, and neuroprotective properties, which may explain its antidepressant actions.

SAMe in depression
SAMe is effective in depression as monotherapy, as augmentation, and possibly in treatment-resistant cases. Its use in depression is supported by over two dozen controlled trials. The main weakness in this research is that most of the studies were small (n < 100).

When compared with antidepressants in head-to-head studies, including tricyclics and SSRIs, SAMe generally performed as well as the medications. Its overall effect size against placebo is 0.65 (confidence interval 0.25–1.05), which is comparable to what we see with most antidepressants (Sharma A, J Clin Psychiatry 2017;78(6):e656–e667).

When it comes to antidepressant augmentation, the studies are fewer. In two small randomized controlled trials (RCTs), SAMe augmentation worked better than placebo in patients who had failed a single antidepressant trial (Papakostas GI et al, Am J Psychiatry 2010;167(8):942–948). A few open-label studies support those benefits, which typically kicked in after one or two weeks. Adding SAMe to an antidepressant can reduce sexual side effects, a benefit confirmed by one RCT (Dording CM et al, Eur Psychiatry 2012;27(6):451–454). SAMe has been safely combined with most classes of antidepressants, including the MAOIs, although in theory the MAOI-SAMe combination could cause serotonin syndrome.

The patients in those augmentation trials had failed a single antidepressant, but what about patients with true treatment-resistant depression who fail more than two antidepressant trials? Here SAMe has only open-label support. One study switched 33 patients with true treatment-resistant depression to SAMe 400 mg BID. After six weeks, 60% remitted and 36% responded (De Berardis D et al, ScientificWorldJournal 2013;2013:204649).

Despite these encouraging results in depression, SAMe may not be a good option in bipolar depression, as there are reports of it inducing mania.

Depression in medical illness
SAMe is particularly helpful in the treatment of depression and comorbid medical illness. In particular, it has potential in depression with Parkinson’s disease, dementia, and HIV, as each of those disorders is associated with low levels of SAMe in the cerebral spinal fluid (Bottiglieri et al, J Neurol Neurosurg Psychiatry 1990;53(12):1096–1098). SAMe also targets specific aspects of these diseases through its anti-inflammatory, antioxidant, and neuroprotective properties.

In HIV-positive patients, SAMe treated depression in a small open-label trial. The improvement was rapid—within one week of starting it—and continued over the next two months (Shippy A et al, BMC Psychiatry 2004;4;38).

SAMe showed promise for Parkinson’s-related depression in several small trials, and it was as effective as escitalopram in a 12-week RCT with a placebo-comparison arm (Varanese S et al, 7th International Congress on Mental Dysfunction & Other Non-Motor Features in Parkinson’s Disease; 2010). It may even protect dopaminergic neurons from levodopa-induced excito­toxicity (Werner P et al, Brain Res 2001;893(1–2):278–281).

In Alzheimer’s dementia, SAMe may improve both cognitive and depressive symptoms. This finding is tentative, as many of the dementia studies combined SAMe with other nutraceuticals, but a secondary analysis of these trials suggests SAMe can improve cognitive functions like recall and word finding (Levkovitz Y et al, J Affect Disord 2012;136(3):1174–1178).

Another challenging comorbidity is depression with chronic pain disorders like osteoarthritis and fibromyalgia. Luckily, SAMe has a mechanism of action that provides both anti-inflammatory and analgesic benefits. In osteoarthritis, SAMe provided pain relief comparable to that of NSAIDs in large, randomized, head-to-head trials. Improvements in pain were seen in three out of four placebo-controlled fibromyalgia trials. Depressive symptoms also tended to improve along with pain in these studies (Sharma A, J Clin Psychiatry 2017;78(6):e656–e667).

Finally, SAMe may improve liver disease, including alcoholic and viral hepatitis, cirrhosis, and cholestasis. The best evidence comes from an RCT in 123 patients with alcoholic liver cirrhosis that showed improved all-cause mortality with SAMe, but large-scale RCTs are missing. 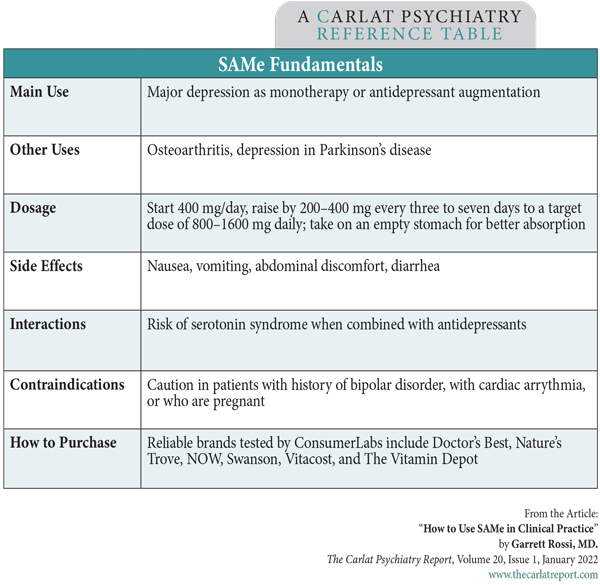 Risks
The most common side effects from SAMe include nausea, vomiting, abdominal discomfort, and diarrhea. Anxiety, insomnia, and mania are also possible. To reduce these risks, use lower doses in geriatric, medically ill, and anxious patients. SAMe should be used with caution in patients who have a history of cardiac arrhythmia and those who are pregnant or breastfeeding. There is limited data on SAMe’s teratogenic or neurodevelopmental effects.

How to use SAMe
SAMe is a reasonable option for depressed patients who prefer CAM therapy. A typical starting dose is 400 mg/day, and it can be raised by 200–400 mg every three to seven days to a target dose of 800–1600 mg/day. Finding a reliable product is important, as SAMe is an unstable compound that can break down with improper handling. Blister packaging reduces this risk, and the table lists brands that had reliable integrity when tested by ConsumerLabs.

TCPR Verdict: Consider SAMe in patients with depression who prefer CAM therapies, and in those who fail to respond to other antidepressant options. SAMe does not cause weight gain or sexual dysfunction and may improve medical outcomes in liver disease and osteoarthritis.
General Psychiatry
KEYWORDS alternative-treatments antidepressant-augmentation complimentary-medicine natural-treatments natural_medications novel-drug same
Garrett Rossi, MD.

Management of Depression and Neurocognitive Impairment in Patients With HIV