When it comes to dosing antidepressants, it’s often assumed that more is better. While this is true for a few meds, most second-generation antidepressants don’t clearly work better at higher doses. In this article, I’ll review the evidence on antidepressant dose-response relationships and the optimal dose ranges for some antidepressants.

Older agents like the monoamine oxidase inhibitors (MAOIs) and tricyclic antidepressants have dose-dependent responses. This means that as the dose is increased, patients usually respond better, within the FDA-approved dose range.

For most psychiatric medications, we can check serum levels to gauge adherence, but with some tricyclics these levels also guide the dosing. Imipramine and amitriptyline show a linear relationship between blood levels and clinical improvement. For nortriptyline, the majority of studies show an inverted “U-shaped” relationship between plasma levels and clinical response. Plasma levels less than 50 ng/mL are inadequate for clinical response, and levels greater than 150 ng/mL are associated with worsening depression. Intermediate levels within a “therapeutic window” of 50–150 ng/mL are necessary for antidepressant response (Amsterdam J et al, Am J Psychiatry 1980;137(6):653–662). The table immediately below lists established therapeutic plasma levels for some tricyclics. 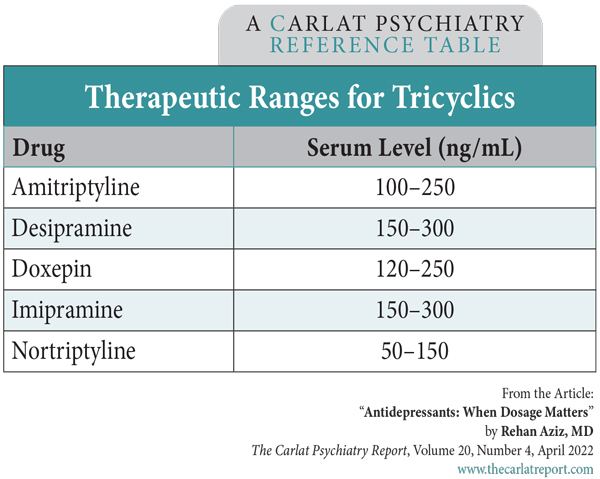 Furukawa’s team looked at 77 studies that altogether included 19,364 participants (mean age 43, 61% women). For the SSRIs, venlafaxine, and mirtazapine, the team evaluated dose, response, and side effect relationships. All SSRI doses were converted to fluoxetine equivalents for ease of comparison.

Venlafaxine had a more classic dose-response relationship. It initially had increasing effectiveness in the range of 75–150 mg daily, followed by a more modest increase in benefit with doses up to 151–375 mg daily. Mirtazapine’s efficacy increased up to a dose of 30 mg daily and then decreased. Dropouts due to adverse effects rose sharply with increasing doses of both drugs. Vortioxetine isn’t as well studied and doesn’t have an obvious dose-response relationship between 10 and 20 mg/day.

The table at the bottom of the page lists the ideal daily dosage ranges for SSRIs, venlafaxine, and mirtazapine in depression based on Furukawa’s work and other studies.

The takeaway here is to dose and titrate SSRIs, venlafaxine, and mirtazapine to the ranges listed in the table. If your patient doesn’t respond after four to six weeks at the highest optimal dose, then it’s probably time to switch to a new drug. If there’s a partial response, consider adding a second medication. 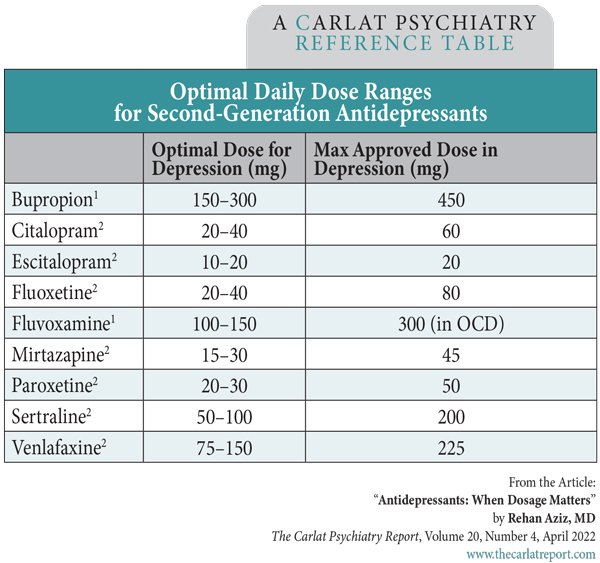 Awkward conversations
Sometimes, patients insist on raising the dose beyond what the evidence supports, such as increasing sertraline from 50 to 150 mg/day. Many clinicians oblige these requests if they can’t find other agreeable options. If the patient improves, keep in mind that the benefit may be due to the placebo response or the tincture of time. Some patients recover through the natural course of the illness, while others may take longer than four weeks to respond to an antidepressant. Six weeks is recommended for the first antidepressant trial, and a new analysis of the STAR*D trial suggests 12 weeks is necessary to assess the second trial (Rush AJ et al, J Clin Psychiatry 2020;11;81(5):19m12949). A judicious titration downward at a later date, once things have settled down, may be worthwhile.

There’s also the possibility of mood worsening at higher doses. SSRIs can cause some depressing side effects like sleep disruption, low libido, and emotional apathy. In a large randomized controlled trial that compared sertraline at 50, 100, and 200 mg/day in major depression, the higher doses added no benefits but doubled the rate of side effects like agitation, insomnia, sedation, and nausea (Fabre LF et al, Biol Psychiatry 1995;38(9):592–602).

Lastly, patients with comorbidities like anxiety disorders, pain, and OCD may do better with higher doses of SSRIs, as these disorders usually require doses up to the FDA-approved maximum. Also, keep in mind that human variability is wider than these studies can cover. The bell curve suggests that 5% of our patients may fall outside these guidelines, either requiring an unusually high dose or responding to a very low one. For patients who seem to need a very high dose, I’ll try to decrease it when things stabilize to reduce long-term risks.

Carlat Verdict:
Dose SSRIs, venlafaxine, mirtazapine, and bupropion in the low-to-medium ranges to achieve optimal efficacy, while minimizing side effects.

Despair, Loneliness, and Substance Use Disorders