Eran D. Metzger, MD
From The Carlat Psychiatry Report
Issue Links: Learning Objectives | Editorial Information | PDF of Issue
Eran D. Metzger, MD Director of psychiatry, Hebrew SeniorLife. Assistant professor of psychiatry, Harvard Medical School, Boston, MA Dr. Metzger has disclosed that he has no relevant financial or other interests in any commercial companies pertaining to this educational activity.
Richard is an 88-year-old former airline pilot who was diagnosed with Alzheimer’s dementia 5 years ago. He managed well at home with his wife initially, but a year ago he required admission to a skilled nursing facility because of worsening symptoms. His transition was difficult. Sometimes he hovered around the exit door and elevators and tried to leave the unit. Other times, he would try to “help” the nursing staff take care of the other residents. On one occasion, Richard caused a resident to fall out of her wheelchair, then became angry and threatening when staff tried to intervene.

While Richard’s primary diagnosis is Alzheimer’s dementia, it’s clear that there’s a lot more going on than just a disorder of memory and information processing. Like 90% of patients with dementia, Richard has secondary symptoms, including agitation and aggression. Other common secondary symptoms in patients with dementia include wandering, psychosis, depression, and anxiety. Geriatricians have developed an umbrella term to describe such symptoms: behavioral and psychological symptoms of dementia (BPSD).

As director of psychiatry at Hebrew SeniorLife, where I’ve practiced for the past 18 years, I’ve witnessed a number of changes in how we manage agitation and other elements of BPSD. In this article, I will outline current thinking about such symptoms, as well as the latest techniques—both pharmacologic and non-pharmacologic—for managing them.

Management I: Non-pharmacologic
After ruling out medical causes of agitation, the staff of dementia units typically begin by coming up with psychosocial and environmental changes that might address the behaviors. While there are several promising psychosocial techniques, at our facility we have found the following to be particularly helpful: habilitation therapy, music therapy, art therapy, and recreational therapy. I will describe the benefits of the first two therapies.

Habilitation therapy starts by meeting with the family to help get to know the patient’s typical routines. Then, staff keep a detailed log of all the patient’s problematic behaviors. For example, Martin, a recent nursing home admission, became combative frequently. The daily logs revealed that he would typically struggle with staff members twice a day: when they tried to undress him for bed at night, and when they would try to put him back to bed after he woke at 4:00 am. After talking in depth to Martin’s wife, staff learned that he had been a newspaper delivery man who used to get up at 4:00 am for his shift. His routine was to shower in the evening and wear the same athletic suit to bed that he wore to work each day. Based on that knowledge, his treatment team altered Martin’s schedule and dressed him at bedtime in one of his athletic suits his wife brought from home. This simple intervention led to a reduction in his combativeness.

One of the key tools of habilitation therapy is remaining very aware of one’s communication, both verbal and nonverbal. For example, it’s important to avoid using the word “no” because patients with dementia have lost the ability to reason out why a particular activity is not acceptable. Instead, staff must rely on non-confrontational redirection. Using our case example of Richard, watching his hazardous efforts to help a patient get up from a wheelchair, we might naturally say, “Richard, stop!” or, “Richard, don’t do that!” But we’re more likely to be successful if we try, “Hey Richard, let me help you with that,” or, “Richard, come over here, I want to show you something.”

Habilitation therapy tries to understand problematic behaviors as communications of a need, and then find ways to meet that need by engaging the patient, thereby minimizing the behaviors. Agitation is one such type of communication, and it can have internal triggers that may take a while for staff to understand. A common example is the patient who angrily accuses staff of stealing a possession, such as a car or briefcase. Rather than responding defensively by saying, “No, I didn’t take that, and that’s not something you have anymore,” a more effective approach is to say, “I know how it feels to lose something. Can I help you find it?” This will often redirect the patient to another activity.

Music therapy
The Music and Memory training program (https://musicandmemory.org) recognizes that providing dementia patients with their favorite songs can help them recall deep memories. These experiences help patients feel more like themselves, and music has been shown in studies to calm patients and enhance their ability to socialize. Music also buys staff time. In our facility, as much as we would like to provide each long-term care resident nonstop individual attention and activities, there are some periods when individual residents are not engaged with staff. Cueing up a playlist for a resident can provide a pleasurable interlude at such times.

Management II: Pharmacologic
Despite providing Richard with aviation charts to peruse and an individualized music playlist, and despite using non-confrontational redirection, the staff continues to observe that he has episodes of unprovoked aggression, which are concerning for the safety of the other patients as well as the staff.

While no medication has been approved by the FDA for treatment of BPSD, several medications are used off-label, and they are often helpful.

Antidepressants
Selective serotonin reuptake inhibitors (SSRIs) are considered first-line treatments for BPSD. The evidence for their effectiveness is based on several studies, in particular a 2014 study of citalopram. In that study, 186 non-depressed patients with Alzheimer’s disease, mean age 78, received a standardized psychosocial intervention and were randomized to receive either citalopram or placebo. Citalopram was started at 10 mg/day and could be titrated to a maximum dose of 30 mg depending on response and tolerability. At the end of the 9-week study, citalopram outperformed placebo in lowering agitation according to both behavioral scales that were used as primary outcome measures (Porsteinsson AP et al, JAMA 2014;311(7):682–691).

In my own experience, SSRIs have been helpful for patients with mild to moderate levels of agitation, including psychomotor restlessness, hostility, and disinhibition. Because of lingering controversy over citalopram and QT prolongation, I prefer to start with escitalopram 5 mg or sertraline 25 mg, then titrate up to 10 mg or 50 mg, respectively, after 1 week. I continue in this fashion until achieving a daily dose of 20 mg escitalopram or 100 mg sertraline.

Although SSRIs are effective, they carry some side effects that are particularly relevant in the elderly population. These include a 1.5-fold increased risk of upper GI bleed, a risk that is increased almost 3-fold by concurrent use of non-steroidal anti-inflammatory drugs, corticosteroids, or past history of upper GI bleed (Wang Y-P, Am J Psychiatry 2014;171(1):54–61. Anglin R et al, Am J Gastroentero 2014;109:811–819). Older patients are also at increased risk of SIADH-induced hyponatremia from SSRIs, and patients who are taking the opioid tramadol or the antibiotic linezolid (both of which tend to show up in post-acute and long-term care settings) are at increased risk for serotonin syndrome. Finally, like benzodiazepines, SSRIs increase the risk of falls in the elderly by 30%–40% (Woolcott JC et al, Arch Intern Med 2009;169(21):1952–1960).

Acetylcholinesterase inhibitors/NMDA antagonists
Medications approved for dementia’s core symptoms (donepezil, rivastigmine, galantamine, memantine) are sometimes helpful in decreasing BPSD, if only because they improve cognition slightly. Controlled trials have shown statistical improvement of some of these symptoms. However, I have rarely seen clinically meaningful improvement in agitation with these classes of drugs.

Benzodiazepines
Although benzodiazepines have long been used to manage agitation in dementia, the tide of medical opinion has turned against them over the last several years because of potential side effects that include loss of balance, impaired cognition, and paradoxical agitation. I use benzodiazepines infrequently, and when I do, I choose short-acting agents such as lorazepam. I have found that a dose of 0.25 mg lorazepam can reduce patient distress when non-pharmacologic approaches have been unsuccessful.

Antipsychotics
Atypical antipsychotics are effective for treating agitation, delusions, and hallucinations, but in 2005 the FDA reported data leading to a black box warning that antipsychotic use in patients with dementia is associated with increased risk of cerebrovascular events and a 1.6- to 1.7-fold increase in mortality. When telling decision-makers about the warning, it’s important to put this statistic into perspective. This is a proportional increase; in the long-term care setting, it would represent a change in the 180-day cumulative mortality rate from 15.1% to 16.6% (Gill SS, Ann Intern Med 2007;146(11):775–786). While these medications must be prescribed off-label in the U.S., the data supporting risperidone’s efficacy and safety has led to its approval in Canada and the United Kingdom for short-term treatment of BPSD.

My practice is to consider an antipsychotic when there are psychotic symptoms or severe aggression. Depending on the frailty of the patient, I’ll start with 0.125 mg–0.25 mg risperidone at bedtime. If we’re not making any progress with this dose, I’ll ­slowly titrate upwards, sometimes moving to twice-daily dosing if agitation is breaking through in the middle of the day.

Avoid prescribing antipsychotics to patients with Lewy body disease, since such patients are very sensitive to extrapyramidal side effects (EPS), even when taking meds like quetiapine that have a low incidence of EPS. Also, be careful when prescribing antipsychotics to patients with Parkinson’s disease, since the parkinsonian tremor, rigidity, bradykinesia, and shuffling gait can be exacerbated. Both clozapine and quetiapine are preferred for such patients. The new antipsychotic pimavanserin (Nuplazid) is FDA-approved for the treatment of psychosis associated with Parkinson’s disease (Cummings J et al, Lancet 2014;383(9916):533–540). I’ve never prescribed it myself because its high price means it is rarely covered fully by insurance companies.

Other medications
Interest in anticonvulsants for managing BPSD dates back to small studies of carbamazepine in the 1990s. Subsequent small, but well-designed, studies of the better-tolerated anticonvulsant divalproex unfortunately showed that the drug did not outperform placebo. Gabapentin, also well tolerated, has only open-label case reports to support its use.

Trazodone has been studied in small trials, and its efficacy is probably comparable to the antipsychotics. I typically use it when agitation is accompanied by insomnia. I’ve found that a bedtime dose of 25 mg–150 mg can reduce daytime agitation without over-sedation in the morning. Other agents to consider include the old antihypertensive prazosin, as well as the much newer dextromethorphan/quinidine combo drug, which is approved for pseudobulbar affect and marketed under the brand name Nuedexta. Even medical marijuana is being studied.

Conclusion
The treatment team meets with Richard’s wife, reviews the non-pharmacologic approaches that had been implemented, and recommends a trial of escitalopram to quell his lingering but still-threatening agitation. The team reviews the risks and possible benefits associated with the medication, and Richard’s wife agrees to the drug trial. Richard tolerates 10 mg, and after no change in his symptoms over 4 weeks, the dose was increased to 20 mg. Over the next 9 weeks, behavior logs indicate a gradual reduction in episodes of aggression. Laboratory studies reveal normal serum sodium and unchanged CBC.

Successfully managing BPSD can be both challenging and fulfilling. You must artfully combine psychosocial and medication treatments while monitoring for potential side effects. Make sure to communicate to the family decision-makers the rationale for any medication trial, the risks associated with treatment as well as the risks of non-treatment, and realistic expectations about the clinical course. The family members will be grateful for your efforts—especially if there’s a good outcome—and in either case, they will appreciate your open communication. 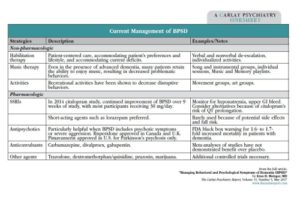