Adam Strassberg, MD.
From The Carlat Psychiatry Report
Issue Links: Learning Objectives | Editorial Information | PDF of Issue
Adam Strassberg, MD. Dr. Strassberg treats sexual dysfunction through his private practice in Silicon Valley, CA. Dr. Strassberg has disclosed that he has no relevant financial or other interests in any commercial companies pertaining to this educational activity.

With the marketing of two new treatments for female sexual dysfunction, one thing is certain: You can expect to see more patients asking for these medications. What’s less certain is whether they will work. Flibanserin (Addyi) and bremelanotide (Vyleesi), the two FDA-approved treatments, both have small effect sizes (0.3–0.4) on various measures of libido.

In this article, I will review the assessment of sexual dysfunction in women and give you a brief survey of both FDA-approved and off-label treatments for this disorder.

Evaluation of sexual dysfunction
There are several types of sexual dysfunction, including low sexual desire, difficulty achieving orgasm, and sexual pain. The most common type of sexual problem in women is low libido, affecting about 40% of all women. Of this 40%, about 1 in 4 report significant distress regarding the low libido, and this distress is one of the criteria necessary for female hypoactive sexual desire disorder (FHSDD) (Shifren JL et al, Obstet Gynecol 2008;112(5):970–978).

Before making the diagnosis of FHSDD, you must rule out medical causes. I typically coordinate with the PCP or OB-GYN and screen for hypertension, diabetes, thyroid disorders, urinary incontinence, elevated prolactin, amenorrhea, and other gynecological conditions. Vitamin D is worth checking; correcting this common deficiency improved libido in an open-label study of 47 women (order as Vitamin D, 25-hydroxy; ICD-10 code E55.9) (Krysiak R et al, Endokrynol Pol 2018;69(2):168–174).

Common psychiatric causes of FHSDD include substance use disorders, anxiety, OCD, and depression. Depression comes with a 50%–70% increased risk of sexual dysfunction, and conversely, sexual dysfunction multiplies the risk of depression by 1.3–2.1. Antidepressants, antipsychotics, and mood stabilizers can cause sexual side effects (see TCPR May 2019 for antidotes to these side effects).

Non-medication treatment
Sex therapy, both individual and couples, can be very effective, as can mindfulness and cognitive behavioral therapy. The aim of mindfulness is to reduce distraction and increase awareness of pleasure during sex, while CBT works by altering underlying beliefs and behaviors that contribute to the problem (Clayton AH et al, Mayo Clin Proc 2018;93(4):467–487).

FDA-approved medications
After I’ve dealt with modifiable risk factors, I consider what, if any, medication options I can offer women with low or absent libido (see table below). 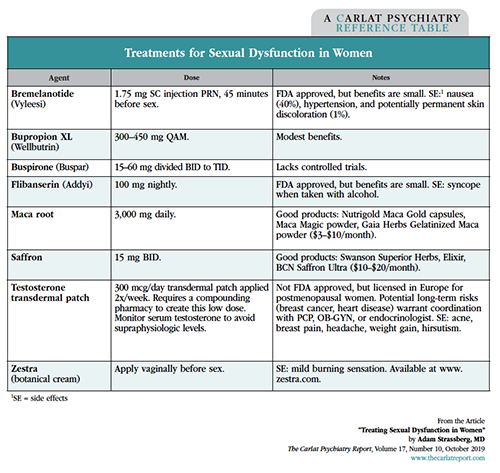 There are two FDA-approved options: flibanserin and bremelanotide. Neither one is my first choice, for reasons I’ll explain below.

Flibanserin (Addyi)
Flibanserin is a mixed serotonin agonist/antagonist that had originally been tested—unsuccessfully—as an antidepressant. There was, however, a small signal of improved sexual function in those studies, which led to specific trials for the treatment of FHSDD. In controlled trials, about 50% of over 3500 women responded to flibanserin. The gains, however, were modest: Participants reported an additional 0.5–1 more satisfying sexual encounters per month as a result of treatment, and a small to moderate effect size (0.2–0.5) on various measures of sexual functioning (Pyke RE & Clayton AH, Sex Med Rev 2018,6(3):358–366). Although it is approved only for premenopausal women, it is effective in postmenopausal women and presents no specific dangers in that group (Simon JA et al, Menopause 2014;21(6):633–640).

Flibanserin’s starting and target dose is 100 mg at night, and its effects build up over a month. Side effects include dizziness (9%), somnolence/fatigue (4%–8%), and nausea (7%). In theory, its antidepressant-like effects on serotonin, dopamine, and norepinephrine could trigger mania, and though this has not been officially reported, I have seen it happen in practice.

Flibanserin has a black box warning about hypotension and syncope with alcohol, a potentially dangerous reaction that was seen in 1 in 5 people who took the medication along with two 12-ounce cans of beer. The FDA relaxed that warning in September 2019, eliminating the REMS system that required patients and providers to register for the drug, and advising women to avoid alcohol within 2 hours of their flibanserin dose instead of avoiding it entirely. That may be a safe strategy for some, but the 2-hour window may not be enough if the drinking is excessive or if the patient has a history of hypotension or takes a CYP3A4 inhibitor (which would raise flibanserin levels).

Cost can be a hindrance, but the company has new programs to ease that. Patients can receive their first 8 weeks of medication free, regardless of insurance coverage (https://hcp.addyi.com). Currently, the average cost per 30 tablets of 100 mg of Addyi is in the $400 range without health insurance coverage or discounts (see www.goodrx.com/addyi).

Bremelanotide (Vyleesi)
See the News of Note on page 5 for details on this recent release, which the FDA approved in June 2019. Briefly, bremelanotide is a self-injected hormone analogue that is used as needed before sexual encounters.

Off-label medications
Though off-label, bupropion (Wellbutrin) is my first choice among FHSDD medications. It is safer, cheaper, and better tolerated than the current FDA options. It helps for many psychiatric comorbidities, and there are a few RCTs to support its use in low libido. In a randomized, double-blind, placebo-controlled trial in non-depressed women, it had modest benefits for orgasm, arousal, and sexual satisfaction at 300–400 mg/day (Segraves RT et al, J Clin Psychopharmacol 2000,20(2):122–128). This result supports earlier bupropion studies in mixed-gender populations—one other randomized double-blind placebo-controlled trial (Crenshaw TL et al, J Sex Marital Ther 1987;13(4):239–252) and a single-blind prospective study (Modell JG et al, J Sex Marital Ther 2000;26(3):231–240).

After a bupropion trial, I often consider buspirone, particularly if an anxiety disorder is present. Although buspirone’s clinical studies are limited to SSRI-induced sexual dysfunction, its mechanism suggests that it could treat FHSDD as well through 5-HT1A partial agonism.

Zestra is a proprietary botanical cream worth trying in FHSDD. In two randomized controlled trials, it improved desire and arousal in 276 women (Ferguson DM et al, J Sex Marital Ther 2010;36(1):66–86). It is applied vaginally before sex, and the main side effect is a mild burning sensation on application that was reported by 14% of women. It is available over the counter at www.zestra.com.

Two other naturopathic agents to consider are saffron and maca root. Both have multiple controlled trials in antidepressant-induced sexual function, and may work for FHSDD as well. Saffron improved multiple phases of sexual activity: desire, lubrication, and orgasm. It is well tolerated and has promising studies in depression, weight loss, and ADHD. Maca root has testosterone- and estrogen-like effects, and is also well tolerated.

Testosterone
Though rejected by the FDA in 2004, transdermal testosterone has been approved in Europe since 2007 for FHSDD in postmenopausal women. This patch notably improves sexual desire and the frequency of satisfying sexual events, doubling those events from 2–3/month up to 5/month, in multiple trials of postmenopausal women with FHSDD. Benefits build gradually over several weeks to months, and a 6-month trial is necessary to evaluate its effects. There are no studies of transdermal testosterone in women of reproductive age.

Testosterone is reasonably safe and well tolerated in the short term, with no serious adverse effects found in a meta-analysis of 36 randomized controlled trials (Islam RM et al, Lancet Diabetes Endocrinol Jul 25 2019 [Epub ahead of print]). Side effects include acne, breast pain, headache, weight gain, and hirsutism. The problem is that long-term use could cause breast cancer or cardiac disease, and we don’t have reliable safety data beyond 2 years. For distressed patients, consider a referral to endocrinology for transdermal testosterone as a second- or third-line agent. Endocrinologists can better evaluate and monitor its risks.

TCPR Verdict: Screen for FHSDD with direct questions. Before jumping to treatment, look for modifiable causes. Referrals are often needed (to couples or sex therapy, primary care, OB-GYN, or endocrinology). After therapy, bupropion is a good first choice. Flibanserin and bremelanotide may have larger studies, but they have small benefits and concerning side effects.

How Much Sex Is “Normal”?

There’s no such thing as a normal amount of sex, but we do have a good sense of the statistical averages. The best data are from the General Social Survey (GSS), run by the University of Chicago’s National Opinion Research Center. Average frequency of sexual intercourse is 1–2 times a week for married couples 18–60 years old, once every 2 weeks for couples in their 60s, and once every 3 weeks for partners in their 70s and up. 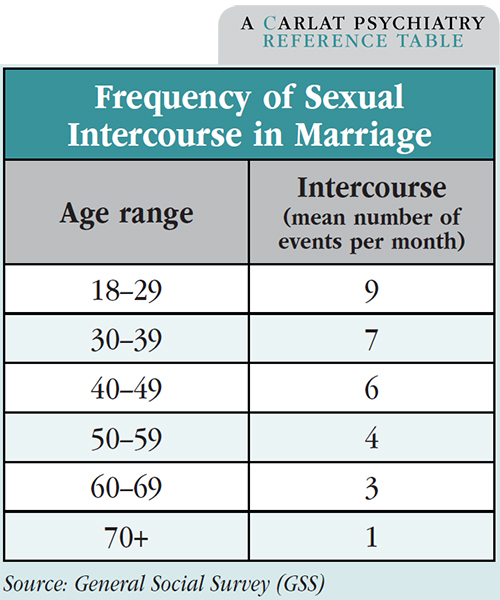 Around 2% of married couples reported no sexual intercourse in the past year. Sex therapists define a “sexless marriage” as one in which the couple has sex 10 times or less per year, in which case 20% of couples in the 1994 GSS survey qualify as “sexless.”

The desire for sex varies widely, and though mismatched desire is a common problem for couples, that is not necessarily the same thing as hypoactive sexual desire disorder, where the low libido is personally distressing. Changes to libido are natural over time, rising and falling in response to personal events or partner-related issues. In both genders, libido decreases with age.