Chris Aiken, MD.
From The Carlat Psychiatry Report
Issue Links: Learning Objectives | Editorial Information | PDF of Issue
Chris Aiken, MD. Editor-in-Chief of TCPR. Practicing psychiatrist, Winston-Salem, NC. Dr. Aiken has disclosed that he has no relevant financial or other interests in any commercial companies pertaining to this educational activity.
Your patient has recovered enough from bipolar depression to leave the hospital, but not enough to return to work. He is inactive, he can’t concentrate, and it takes him 4 hours to wake up in the morning. What can you add to his regimen of lithium, lamotrigine, and lurasidone?

Modafinil (Provigil) and armodafinil (Nuvigil) are wakefulness-promoting agents with stimulant-like properties. Although FDA-approved for narcolepsy, residual fatigue in obstructive sleep apnea, and shift work disorder, they have gained popularity in mood disorders since the first report of their antidepressant effects in 2000. Recently, the air came out of that balloon when armodafinil failed in two out of three industry-sponsored trials for bipolar depression. The story does not end there, however, and in this article I’ll look at where these medicines fit in the bipolar regimen.

Mechanisms
The modafinils are thought to treat depression through several mechanisms. They increase dopamine in the nucleus accumbens, which regulates reward and hedonic drive. They also have noradrenergic, GABAergic, and glutamatergic effects, but what separates them from other psychotropics is their effects on histamine and the orexin system. Those properties explain the “vigil” in Provigil and Nuvigil: They help people wake up and stay alert throughout the day.

The modafinils in bipolar depression
Although the industry-sponsored trials had mixed results, the modafinils may still have a role in bipolar depression. There was a small benefit shown when all five randomized controlled trials in bipolar depression were meta-analyzed together. By “small,” I mean the number needed to treat (NNT) was 16 for remission and 15 for response, just a little worse than the NNTs for response to lamotrigine (12) and cariprazine (10). Though small, those NNTs still had good statistical certainty, with low p-values (0.005–0.03) and many subjects (1,587) (Nunez NA et al, Bipolar Disord 2019;22(2):109–120).

Though they do little to treat depressive episodes, the modafinils do help a few key symptoms that patients tend to care about: fatigue, cognition, and overall functioning. Those effects are noticeable in practice and supported by studies in mood disorders and other conditions. For example, armodafinil improved functioning even when it failed to treat bipolar depression in a large trial (Frye MA et al, Int J Bipolar Disord 2015;3:14). For patients, that can make the difference between going to work and staying in bed.

Cognitive effects
About one in three people with bipolar disorder continue to have functional impairments even after their mood episodes resolve. Little is known about how to treat those cognitive impairments, but the modafinils have some potential here. They work in ADHD with a medium-to-large effect size, just below the effect we see with conventional stimulants, according to six controlled trials totaling nearly 1,000 subjects (Lowenthal R et al, Eur Neuropsychopharmacol 2017;27(S4):S1107). Modafinil even came close to FDA approval in ADHD, but was held back when a child developed Stevens-Johnson syndrome on it (a risk that is rare but likely real).

Side effects
Tolerability is a strong suit for the modafinils, with a number needed to harm (NNH) of 64 in the bipolar studies. Headache, nausea, anxiety, and weight loss are the most common side effects. In the bipolar trials, they actually improved anxiety a little, possibly because of their GABAergic effects (Nunez NA et al, 2020). The modafinils do not worsen sleep quality like traditional stimulants do, but they can cause initiation insomnia, which is worse with the longer-­acting armodafinil.

Medical risks are rare, limited to severe allergic reactions and mild elevations of blood pressure and pulse without QTc prolongation.

Mania, psychosis, and abuse
Mania, psychosis, and addiction are rare on the modafinils and limited to a few case reports. These problems did not show up in studies of mood disorders, schizoprenia, or addiction, numbering several thousand subjects. In theory, the modafinils could prevent mania by stabilizing circadian rhythms, helping patients to wake at regular times and stay out of bed during the day.

The modafinils have low reinforcing properties and lack tolerance and withdrawal. They are Schedule IV controlled substances and are often obtained through the internet by people who use them as cognitive enhancers.

How to use them
Good candidates for the ­modafinils include those with bipolar depression who want to avoid side effects and those with residual symptoms of fatigue or cognitive dysfunction in bipolar disorder. Those with comorbidities listed in the table on page 6 are also good candidates. The ­modafinils should be used in conjunction with a mood stabilizer or atypical antipsychotic.

Their benefits build up steadily over 1–2 weeks in depressive episodes, but they usually work right away for residual symptoms and can be taken as needed for them. Most patients prefer armodafinil, but if they develop insomnia on it, consider changing to a low dose of modafinil.

TCPR Verdict: The modafinils will rarely bring bipolar depression to full remission, but they are useful for specific symptoms of fatigue and cognitive dysfunction as well as for a few comorbidities that are common in bipolar disorder.

Table: The Modafinils in Bipolar Disorder 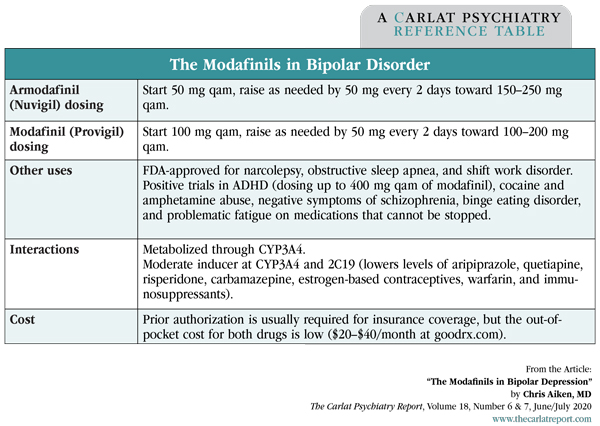