Home » Is Ramelteon an Effective Hypnotic?

Is Ramelteon an Effective Hypnotic?

Ramelteon (Rozerem) stands out from other hypnotics in several ways:


However, ramelteon’s use has been limited by its high cost and modest efficacy. Now that it’s gone generic, we’ll look back on its 15-year tenure to figure out where this novel hypnotic stands.

How it works
Ramelteon is a synthetic analog of melatonin. It is an agonist at the melatonin receptors that regulate sleep and circadian rhythms and binds to them with greater affinity than natural melatonin. Those receptors are MT1 and MT2. MT1 promotes sleep by inhibiting wakefulness signals from the suprachiasmatic nucleus. MT2 synchronizes the circadian clock that regulates the 24-hour sleep cycle.

Tasimelteon (Hetlioz) has similar properties to ramelteon but is only FDA approved for insomnia in people whose circadian clocks are out of sync because of blindness.

A small but real effect
Compared to placebo, ramelteon helps patients with primary insomnia fall asleep 4–9 minutes faster (Kuriyama A et al, Sleep Med 2014;15(4):385–392). That might sound fairly unimpressive, but it’s only a few minutes behind the other hypnotics. It appears to work about as well as melatonin (0.5–5 mg qhs), but ramelteon has never gone head-to-head with another hypnotic, so all these comparisons are tentative and indirect. 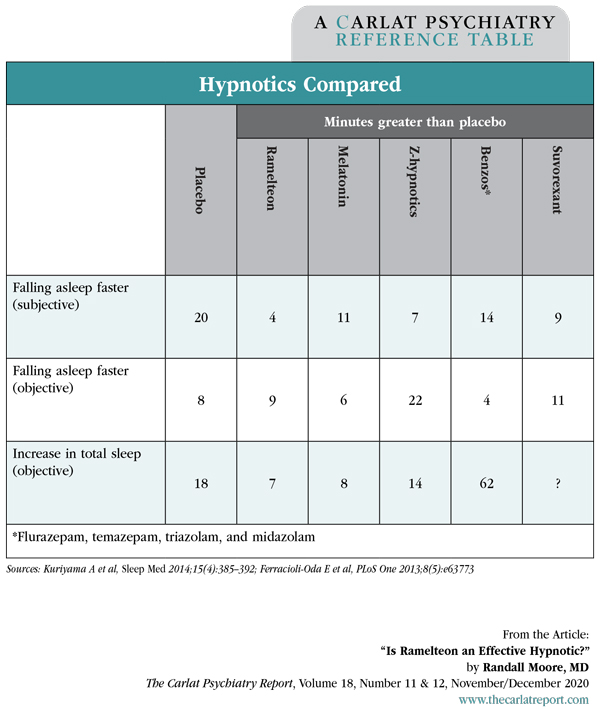 Given that ramelteon and melatonin are similar in efficacy and mechanism, why not just use melatonin as a hypnotic? Melatonin is a standard hypnotic in Europe, where it is regulated as a prescription product. However, in the US, melatonin is an over-the-counter supplement that is particularly vulnerable to quality control issues. When tested, 70% of melatonin products didn’t contain the amount on the label, with amounts that varied from 1/5th to 5 times the labeled amount (Erland LAE and Saxena PK, J Clin Sleep Med 2017;13(2):275–281). Melatonin’s half life (1 hour) is also much shorter than ramelteon’s (3 hours), but that problem can be improved with a sustained-release product. If your patient does go the melatonin route, reliable brands include1:

1These brands were certified by Consumer Labs or United States Pharmacopeia (USP), or were tested in clinical trials.

When it comes to long-term use, ramelteon has durable benefits, with no tolerance or withdrawal noted in controlled trials lasting up to 6 months and open-label studies up to 1 year. In some studies its benefits built up over weeks to months, which may be due to entrainment of the circadian system with nightly use. Benzodiazepines, and to a lesser extent the z-hypnotics, show some evidence of tolerance and withdrawal effects with long-term use (Neubauer DN, Neuropsychiatr Dis Treat 2008;4(1):69–79).

Ramelteon’s main advantage is in safety. It did not increase the risk of falls in trials that enrolled patients up to age 93. It is one of a few hypnotics that the Beers Criteria for Potentially Inappropriate Medication Use in Older Adults do not flag as problematic in the elderly (the other safer hypnotics in this list include doxepin, suvorexant, lemborexant, and melatonin). Although all hypnotics carry a blanket warning about complex sleep behaviors, such as cooking or driving while asleep, these are not known to occur with ramelteon.

Ramelteon’s most common side effect is fatigue, but after a month it did not cause any more next-day sedation than placebo. Like other hypnotics, ramelteon can impair next-day driving. Other possible side effects include nausea, abdominal discomfort, headaches, and paradoxical insomnia (Neubauer, 2008).

Other benefits
Ramelteon has also been explored in bipolar disorder and delirium. Based on three randomized, placebo-controlled trials (n = 746), ramelteon may lower the risk of relapse into depression in bipolar disorder when started in manic or euthymic states, but this effect is very small—only 1 in 14 patients benefited (Kishi T et al, Neuropsychiatr Dis Treat 2019;15:1479–1486).

Table: Ramelteon: At a Glance 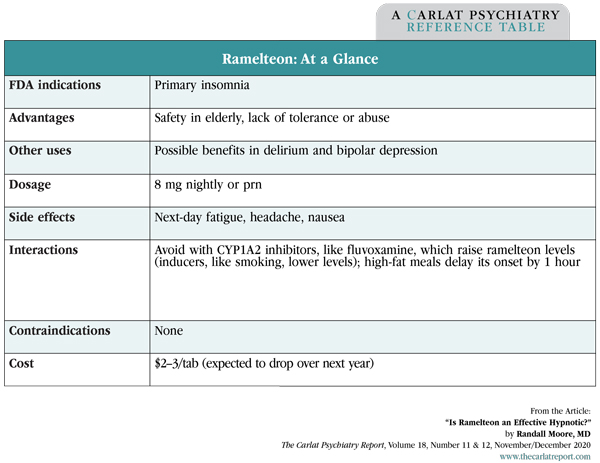 How to use it
Ideal candidates for ramelteon include the elderly, those at risk for falls or substance abuse, and patients who are likely to need a long-term hypnotic. The starting dose is the same as the max dose (8 mg qhs) and it can be taken nightly or as needed, about 30 minutes before bedtime. Patients should not take ramelteon too late because doing so might phase-delay the circadian rhythm (ie, turn patients into night owls). Ramelteon is an expensive generic, but most insurers cover it, and its price should fall soon as more generic competitors enter the market.

Patients may have trouble switching from other hypnotics to ramelteon, with its lower potency and lack of rewarding and anxiolytic properties. Cross-tapering may be necessary when changing from some hypnotics.

TCPR Verdict: With their modest benefits, the cardinal rule with sleep medications is to do no harm. Ramelteon fulfills that promise, but it’s not as potent as other hypnotics and may not be much better than melatonin.

To learn more, listen to our 12/7/20 podcast, “CBT-Insomnia: A Patient Guide.” Search for “Carlat” on your podcast store.