Home » How to Select an SSRI

How to Select an SSRI

Chris Aiken, MD.
From The Carlat Psychiatry Report
Issue Links: Learning Objectives | Editorial Information | PDF of Issue
Chris Aiken, MD. Editor-in-Chief of TCPR. Practicing psychiatrist, Winston-Salem, NC. Dr. Aiken has disclosed that he has no relevant financial or other interests in any commercial companies pertaining to this educational activity.

On March 14, 2012, Lexapro became the last SSRI to lose its patent, closing the book on a quarter century of science and marketing that changed and sometimes confused the way we think about antidepressants. Now that the unpublished studies have come to light and the incentives to favor one drug over another have dried up, it’s a good time to take a sober look at what—if anything—really sets the six SSRIs apart.

How well do they work?
Enough independent meta-analyses are available that we can draw some conclusions about where the SSRIs stand in relation to other antidepressants. Judging from head-to-head trials (over 200 in all)1:

The SSRIs are better tolerated than most antidepressants except vortioxetine and bupropion. Those two are often favored for their cognitive benefits and relative lack of sexual side effects, sedation, and weight gain. So the SSRIs are a good place to start. But which is the most effective?

With a few small exceptions that I’ll point out below, none of the SSRIs clearly stand out for their efficacy. Instead, it’s their medical risks, drug interactions, and withdrawal problems that set them apart. In those respects, escitalopram, sertraline, and fluoxetine rise to the top, while citalopram, fluvoxamine, and paroxetine are less desirable. I’ll explain why as I walk through each of the SSRIs.

Escitalopram and citalopram
Citalopram (Celexa) is a 50/50 mix of R- and S- isomers. Escitalopram (Lexapro) is the purified S- isomer, and its serotonergic effects are 166 times more potent than the R-. These two “-pram” SSRIs were marketed for their relative lack of drug interactions and high selectivity for the serotonin transporter, both of which are true. They are the only SSRIs that don’t induce or inhibit the CYP enzymes. This may explain why they have the best evidence for bupropion augmentation (other SSRIs interact with bupropion). But the -prams can be victims of a common drug interaction that, in the case of citalopram, is often a deal breaker.

Citalopram is the SSRI with the highest risk of QTc prolongation (escitalopram is second highest). This risk goes up as the dose increases, and CYP2C19 inhibitors like cimetidine markedly raise citalopram levels. It’s a big enough problem that the FDA caps citalopram’s dose at 20 mg/day for patients on CYP2C19 inhibitors, poor metabolizers at CYP2C19, and any patient over age 60.

For that reason, I often switch older patients from citalopram to escitalopram. The conversion is imprecise and requires some fine tuning, but a rough approximation is to divide the dose by 3 (eg, 60 mg of citalopram = 20 mg of escitalopram).

Besides being safer in the elderly, escitalopram is also FDA approved down to age 12 in depression, although that approval was based on trials with mixed results and modest benefits. In adults, escitalopram may have a slight efficacy edge over other SSRIs if we believe in network meta-analyses and a handful of head-to-head trials (including against citalopram), but this advantage is minimal at best and illusory at worst (Cipriani A et al, Lancet 2018;391(10128):1357–1366).

Sertraline
Sertraline (Zoloft)’s main advantage is safety. Among the SSRIs, it has the most favorable profile in cardiac disease, pregnancy, and breast-feeding (Womersley K et al, Psychiatr Danub 2017;29(Suppl 3):629–644). It also has a low chance of upsetting the CYP enzymes as long as the dose is kept below 150 mg/day. Beyond that, it has meaningful inhibition at CYP2D6. This rarely causes problems in depression, where sertraline’s benefits plateau beyond 100 mg/day (Hieronymus F et al, Transl Psychiatry 2016;6(6):e834).

Fluoxetine
Fluoxetine (Prozac) has a few qualities that patients appreciate. Its long half-life means it has the lowest risk of serotonin withdrawal problems. SSRI withdrawal may not be dangerous, but it stokes fears of addiction that often cause people to avoid psychiatric treatment. Fluoxetine also has less weight gain than the other SSRIs (Uguz F et al, Gen Hosp Psychiatry 2015;37(1):46–48). The difference is small, but it may be meaningful for patients with bulimia, where fluoxetine is the only FDA-approved SSRI, and for binge eating disorder, where it has good efficacy evidence. In both those eating disorders, the optimal dose is 60–80 mg/day.

Fluoxetine is usually first line in pediatric depression, where its approval goes down to age 8. Though many drugs have been tried, only a few antidepressants have succeeded in pediatric depression. Those are fluoxetine, escitalopram, citalopram, and sertraline, although they actually have a mix of positive and negative results (Cipriani A et al, Lancet 2016;388(10047):881–890). 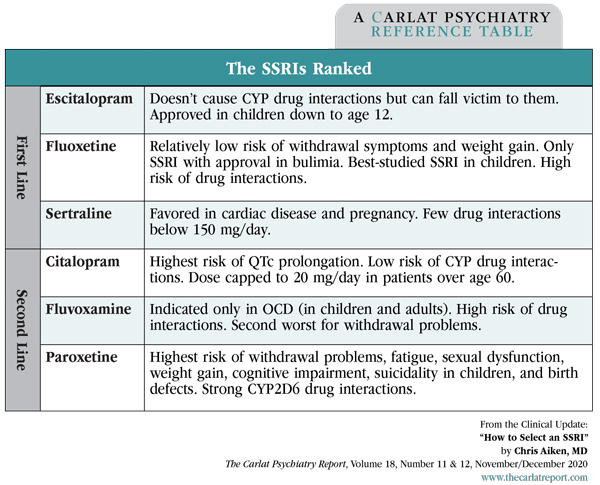 The reason to avoid fluoxetine is its drug interactions. As a potent inhibitor at CYP2D6 and 2C19, fluoxetine raises levels of many medications, including propranolol and antidepressant augmenters like aripiprazole, brexpiprazole, risperidone, bupropion, and the tricyclics (and it does so for up to 6 weeks after it is stopped). In some cases, fluoxetine can render medications less effective by preventing their conversion to active metabolites at CYP2D6 (eg, tamoxifen, tramadol, hydrocodone).

Fluvoxamine
Fluvoxamine (Luvox) is approved only for OCD in the US, though in other countries it is licensed for depression and social anxiety disorder. In those disorders it works about as well as the other SSRIs, but there are two qualities that make it less favorable: high withdrawal symptoms and drug interactions. It is a potent inhibitor at CYP1A2, 3A4, 3A5, and 2C19, which can cause significant problems if it raises the levels of clozapine, clomipramine, alprazolam, flibanserin, ramelteon, theophylline, and warfarin.

Paroxetine
Paroxetine (Paxil) is the problem child of the SSRIs. It has the highest risk of serotonin withdrawal, birth defects, suicidality in children, weight gain, and fatigue (Nevels RM et al, Psychopharmacol Bull 2016;46(1):77–104). Its anticholinergic effects make it less favorable in the elderly, and it is the only SSRI that has been linked to dementia risk. As a strong CYP2D6 inhibitor, paroxetine can raise many medication levels or, like fluoxetine, render tamoxifen and some opioids ineffective.

Paroxetine has a reputation as the best SSRI for anxiety, perhaps because it is FDA approved in more anxiety disorders than its competitors. However, its anxiolytic effects are generally less than or equal to other SSRIs. In depression, anxious features do not predict who will respond to paroxetine (Sugarman MA et al, PLoS One 2014; 9(8):e106337; Sanchez C et al, Int Clin Psychopharmacol 2014;29(4):185–196).

What is there to redeem paroxetine? Like any medication, some patients respond well to it, but it’s impossible to predict who they are.

TCPR Verdict: Escitalopram and sertraline are good all-around SSRIs. Sertraline is the go-to in pregnancy and heart disease, while fluoxetine is first choice in childhood depression. Fluoxetine’s relative lack of withdrawal problems makes it a friendly choice for many patients, but its drug interactions can hold it back.

To learn more, listen to our 11/16/20 podcast, “The Rise and Sudden Fall of Zimelidine, the First SSRI.” Search for “Carlat” on your podcast store.