Genetic Testing: What You Need to Know in 2021 Vice Chair for Preclinical Research, Department of Psychiatry, Indiana University, Indianapolis, IN. Dr. Nurnberger has disclosed no relevant financial or other interests in any commercial companies pertaining to this educational activity.

TCPR: Is there a role for genetic testing in clinical practice?
Dr. Nurnberger: I think the evidence is growing that there’s a place for this in clinical practice. The meta-analyses of pharmacogenetic tests are actually looking pretty favorable recently, at least for some genes, particularly CYP2D6 and 2C19 (Bousman CA et al, Pharmacogenomics 2019;20(1):37–47). These code for metabolic enzymes in the liver and predict whether the patient will have unusually high levels of certain medications (ie, a poor metabolizer) or low levels (ie, a rapid metabolizer). Other genetic markers have not panned out as well, like the S and L allele of the serotonin transporter.

TCPR: That’s interesting that the meta-analyses are positive, because most of the individual studies were not, except on secondary outcome measures.
Dr. Nurnberger: Yes. What seems to be happening is that there is a trend toward positive results in the depression trials, and those trends create a more positive signal when added together in a meta-analysis. But this isn’t a slam-dunk. It’s not the kind of evidence that the FDA would like to approve a drug.

TCPR: When would you order genetic testing?
Dr. Nurnberger: It’s not at all routine in my practice, and I don’t think it should be routine in anyone’s practice. Where you might consider it is for patients who have failed a couple of antidepressant trials or have had very unusual responses to medications. Sometimes those results will guide treatment, and patients also appreciate knowing that there is a reason behind the experiences they’ve had with medications.

TCPR: Most genetic panels look at one or two dozen genes. Which genes are most useful?
Dr. Nurnberger: The ones I pay attention to are the CYP genes that affect antidepressant metabolism and, to a lesser extent, antipsychotic metabolism. Those are CYP2D6 and 2C19, and sometimes 3A4. I also pay attention to the summary recommendations, particularly the part about medications to avoid, but I take those recommendations with a grain of salt. You have to look at where that evidence comes from. If a panel says to avoid a medication because of 2D6 or 2C19 results, it’s more solid.

TCPR: So you put more weight on those genes than you do on the summary results in the panel.
Dr. Nurnberger: Yes. The evidence is much stronger for those individual genes than it is for the summaries. Those summaries are based on algorithms that are not made public, so there’s a little bit of a black box going on, and each company uses a different algorithm. Companies may also differ in how they present results of individual genes because there is no consensus on which combinations of alleles translate to rapid or slow metabolizer status.

TCPR: Are there other genes worth paying attention to on these panels?
Dr. Nurnberger: Another one that can be critical is HLA genotyping. The FDA requires this test before starting carbamazepine in patients of Asian descent, because a positive result means they have a very high risk—around 90%—of allergic reactions like Stevens-Johnson syndrome on carbamazepine (Editor’s note: A positive HLA-B*1502 carries the highest risk).

TCPR: How would you interpret a positive HLA in someone who’s not of Asian descent?
Dr. Nurnberger: I’d interpret it as a warning signal and would not use carbamazepine. The original FDA warning requires the test in Asian populations because that is where the yield is highest, but subsequent studies have shown it is relevant to others as well. The original HLA subtype was identified in people of Han Chinese descent, but since then, we’ve identified other subtypes in other populations that convey a similar risk. In test results you’ll see these as HLA-A and HLA-B, and a positive result on either is a good reason to avoid carbamazepine (Mullan KA et al, HLA 2019;93(6):417–435). 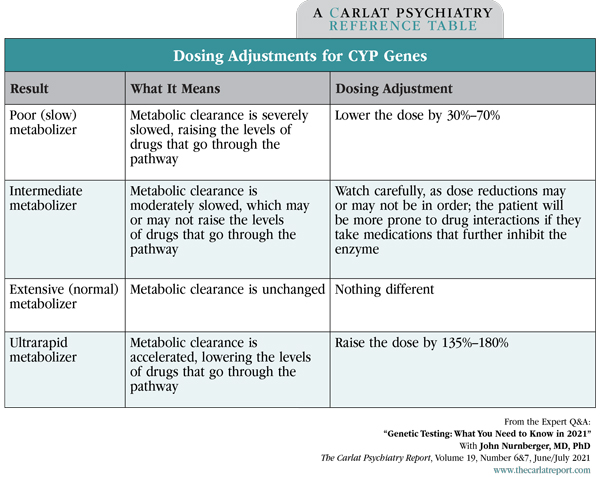 Table: Pharmacogenetic Recommendations from the FDA 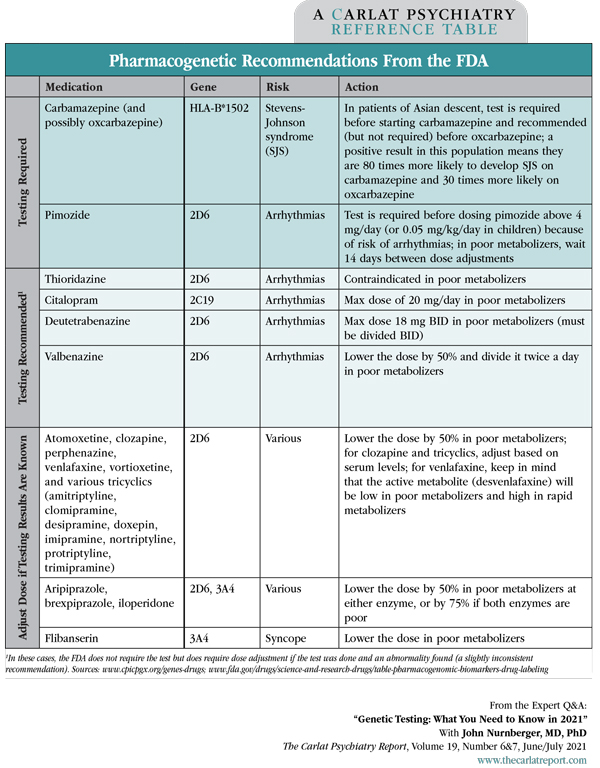 TCPR: Does HLA subtyping predict rashes on other anticonvulsants, like oxcarbazepine or lamotrigine?
Dr. Nurnberger: It does for oxcarbazepine. We now have enough data that the Pharmacogenomic Implementation Consortium recommends avoiding oxcarbazepine in people with a positive HLA result. With lamotrigine it is not yet as useful.

TCPR: Do you have to use the commercial panels to test for these genes?
Dr. Nurnberger: No. You can order them directly through most clinical laboratories, either with a blood draw or cheek swab. I have a little more confidence in results from an academic laboratory than a commercial panel. In terms of cost, it’s difficult to say, as that will depend on the patient’s insurance, but it may be more cost effective to test for individual genes that are relevant.

TCPR: The CYP genes predict serum drug levels, so why not just test the drug level directly if you’re concerned?
Dr. Nurnberger: Nothing wrong with that. The only disadvantage is that you can’t test the drug level until the patient is on the drug. With genetic testing, you can avoid the problem altogether, which may be relevant for a drug like citalopram where slow metabolizers are at risk for QTc prolongation and torsades de pointes when the dose goes beyond 20 mg a day.

TCPR: One topic that patients often bring up is the MTHFR gene, which is supposed to predict response to l-methylfolate augmentation in depression.
Dr. Nurnberger: My reading is that the evidence is not that great for MTHFR. There may be unusual circumstances in which genetic information on MTHFR may be clinically useful (such as a patient with multiple mutations), but there’s no evidence that it is generally relevant. These tests can steer clinicians in the wrong direction, causing them to avoid medications that could be useful.

TCPR: Are there risks of over-testing with genetic panels?
Dr. Nurnberger: I think the risk is blind adherence to recommendations. If a patient is doing well on a medication, they should not be taken off it just because the genetic panel recommends avoiding it. Clinicians should not limit themselves to the medications that are recommended by the panel. They have to look at the whole picture like the patient’s age, comorbidities, and whether the patient’s depression is bipolar or has atypical, melancholic, or mixed features. The evidence is just not strong enough to base everything on the genetic test.

TCPR: Which psychiatric disorders have the strongest genetic basis?
Dr. Nurnberger: Bipolar disorder, schizophrenia, and autism are the most heritable of the adult psychiatric disorders, with a heritability of 80% or greater. That means when it comes to the variance as to whether somebody is going to be affected or not, about 80% is determined by genetic factors. OCD is a little less—around 70%. The ones that are not as heritable are major depression, anxiety disorders, ADHD, and alcohol and substance use disorders; these have more like 40%–50% ­heritability.

TCPR: Can genetic testing inform diagnosis?
Dr. Nurnberger: Yes, but primarily for cases that result from copy number variants (small insertions or deletions) or rare sequence variants. This is relevant for intellectual disability and autism (and to a lesser extent for schizophrenia and bipolar disorder). However, in the future we may get more information from polygenic risk scores. To construct these, one looks at all the genetic markers in the genome that seem to differentiate cases from controls. Then you weigh each marker by the strength of its association (ie, effect size), and when you put all this together you have a score that tells you the genetic risk for a particular disorder. This could be very useful. Let’s say you are treating a teenager with depression. If the polygenic risk score showed a high probability of bipolar disorder, you might avoid or be very careful with antidepressants.

TCPR: Are polygenic risk scores ready for practice?
Dr. Nurnberger: Close, but not yet. One problem is that the results do not apply equally across all ethnic groups. Although we have large samples—tens of thousands of patients and hundreds of thousands of controls—most of it is from people of European ancestry. But genetic testing is ready for clinical practice in autism and intellectual disability. This type of testing is recommended by all the major medical organizations that are involved in the care of persons with these disorders: psychiatry, neurology, and pediatrics (Fullerton JM and Nurnberger JI, F1000Res 2019;8(F1000 Faculty Rev):1293).

TCPR: Tell us about that.
Dr. Nurnberger: The specific test is “whole exome sequencing” (WES), which is a chromosomal microarray that looks at a panel of gene variants. The results do not tell you if a patient has autism. Instead, they test for specific chromosomal conditions that are associated with autism and intellectual disability. For example, there is the 22q deletion, which is associated with a particular syndrome that involves heart defects as well as autism and other physical stigmata.

TCPR: Do the results change practice?
Dr. Nurnberger: They can in several ways. First, they open the door to groups that offer support for families that have these syndromes, such as the Prader-Willi Association (Prader-Willi syndrome is associated with a deletion on the long arm of chromosome 15). The tests are also useful clinically because they tell us about other organ systems that may be affected, and in some cases lead to specific treatments. We test children primarily but also adults. The results are positive around 15% of the time in autism and 25% in intellectual disability (Editor’s note: The WES test is not recommended for mild autism spectrum disorders, such as high-functioning Asperger’s disorder). We are also seeing more of these genetic ­abnormalities in schizophrenia, but here the rate is lower, around 5% (Nurnberger JI et al, J Clin Psychiatry 2018;­ 80(1):17nr12046).

TCPR: If the child is positive for one of these disorders, does that mean the parent is a carrier?
Dr. Nurnberger: Not necessarily. These genes can be inherited or can arise de novo. Mutations can occur from environmental factors or the aging process, which is why advanced paternal age is a risk factor for these disorders. It is also a risk factor for schizophrenia.

TCPR: How do you order WES testing?
Dr. Nurnberger: One way is through the department of medical genetics if you are near an academic medical center. Commercial labs also offer it, and it can be done through blood or saliva. The test is usually called “WES for autism spectrum disorders.”

TCPR: Are there other promising genetic tests on the horizon?
Dr. Nurnberger: We are getting closer in some areas, like genes that predict agranulocytosis and clozapine or weight gain on antipsychotics. Lithium response is another area where there’s been a lot of work, but this is more complex and will probably involve other markers besides genes. For example, we are developing ways to test for lithium response using cell lines that are grown in the laboratory. I think lithium is unfortunately underutilized in the US, and a test like that might be one way to enhance its use.

TCPR: Thank you for your time, Dr. Nurnberger.