Dr. Hendrick and Dr. Carlat have disclosed no relevant financial or other interests in any commercial companies pertaining to this educational activity.

If you work in an emergency department (ED) or psychiatric inpatient unit, you’ve encountered agitated and even violent patients. We can help many patients settle down by listening empathically, validating their emotions, and offering oral medications, but even with our best efforts, these interventions do not always work. Medications help reduce agitation, but which ones are the safest and most effective? In this article we will discuss medication strategies that have reasonable safety and efficacy data for managing acute agitation in ED settings and inpatient psychiatry. (Editor’s note: We will cover verbal de-escalation techniques for agitation in an upcoming issue.)

What’s the cause of the agitation?

Before medicating an agitated patient, try to determine the cause. In this article we will focus on agitation caused by a primary psychiatric condition—usually schizophrenia, schizoaffective disorder, or a manic episode of bipolar disorder.

With most of our agitated patients, a primary psychiatric origin is clear from the history. The main differentials to consider are substance-induced agitation, whether intoxication or withdrawal, and delirium/dementia. If a patient is agitated due to alcohol or stimulant intoxication, you can generally follow the medication guidelines in this article, but beware of benzodiazepines, which can have a synergistic effect with alcohol. If the issue is withdrawal, management is more complicated, and we recommend reading “Managing Substance-Related Agitation” in CATR May/June 2019 for education on the options. We will cover delirium and dementia in a forthcoming issue.

Once you’ve determined that the agitation is psychiatric in origin, you will next have to decide between using oral or IM meds to ease the behavior. While IM medications in general have more reliable bioavailability and a faster onset of action than oral meds, there is a lot of variability in how quickly these options work to quell agitation. In fact, one small study of 42 patients found that two special oral formulations (Zyprexa Zydis and risperidone liquid solution) worked just as quickly as IM haloperidol for agitated psychotic patients (Hsu WY et al, J Clin Psychopharmacol 2010;30(3):230–234).

Aside from issues of bioavailability, there is the practical issue of whether the patient will accept an oral medication. When patients are about to injure staff or damage hospital property, time is of the essence, and attempting to convince such patients to take a pill is a time-consuming and often futile process. Furthermore, assuming patients do agree to oral administration, it is difficult to ascertain that they have actually swallowed the pill.

There are no clear answers to the oral vs IM conundrum, and each clinical situation requires its own analysis. Generally speaking, the higher the risk for violence, the more likely you and your staff are going to choose IM meds. Be careful not to assume based on a patient’s appearance that they’ll require IM meds; even the most highly agitated patients might be willing to accept an oral medication. And administering IM meds can backfire: Patients may perceive them as aggressive acts, potentially escalating the risk for patient and staff injury.

Orally disintegrating tablets (ODTs) are designed to dissolve on the tongue. These formulations have been on the market for years, but they recently became more popular in psychiatry with the development of a new tablet compression technology called Zydis, which produces pills that dissolve in the mouth within three seconds.

Zyprexa Zydis has achieved something of a niche in the treatment of agitated and psychotic patients in EDs and inpatient settings. But is its onset of action really any faster than regular Zyprexa? One pharmacokinetic study of 11 healthy people found that Zydis appeared in the bloodstream on average 10 minutes after ingestion, as opposed to 30 minutes for standard Zyprexa tablets. The study also found that the average time to peak concentration was 3.5 hours for Zydis and 4.4 hours for the tablets (Markowitz JS et al, J Clin Pharmacol 2006;46(2):164–171).

The bottom line is that ODT formulations (Zyprexa Zydis, aripiprazole ODT, risperidone ODT) are likely faster acting than standard tablets. For patients willing to take a pill, Zyprexa Zydis is a good choice for more rapid control of agitation, and it has the advantage of being difficult to cheek because it dissolves almost instantaneously. 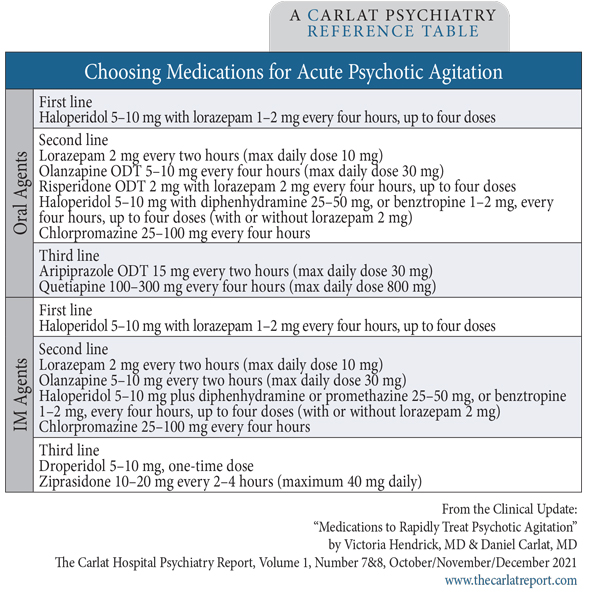 With all that said, which medications are most effective in treating agitation? Let’s run down the list.

Haloperidol (Haldol) and the haloperidol cocktails
Haloperidol has long been the gold standard for treating agitation. No other drug has been found to be more effective than haloperidol, and most studies of other agents use haloperidol as the comparison. Haloperidol has its disadvantages, including side effects like dystonia and Parkinsonism, but given its long track record (since 1967), we still consider it the first-line agent for agitation. However, we never prescribe haloperidol alone because in these circumstances the rate of dystonia is close to 50%—and one review considers the use of haloperidol alone to be unethical due to the high rate of EPS (Ostinelli EG et al, Cochrane Database Syst Rev 2017;7(7):CD009377).

That brings us to the haloperidol cocktail and its variants. The typical agitation cocktail is haloperidol 5–10 mg/lorazepam 1–2 mg/diphenhydramine 50 mg (or benztropine 1–2 mg), given either IM or orally. The commonsense rationale behind the cocktail is as follows: Haloperidol targets both psychosis and agitation; lorazepam adds a second mechanism to target agitation; and diphenhydramine prevents a dystonic reaction from the haloperidol and adds a sedating effect. Yet no studies have compared this three-medication combination with other options. Furthermore, it’s an open question whether anticholinergic agents like diphenhydramine are really necessary. A recent meta-analysis showed that benzodiazepines might suffice to prevent EPS: Rates of dystonia and EPS were 3% and 5%, respectively, for haloperidol plus lorazepam, vs 0% (dystonia) and 0%–84% (EPS) for haloperidol plus the antihistamine promethazine (Bak M et al, Eur Psychiatry 2019;57:78–100). Many guidelines recommend using a combination of haloperidol plus anticholinergic or haloperidol plus benzodiazepine, but not all three agents combined (Wilson MP et al, West J Emerg Med 2012;13(1):26–34). An advantage of haloperidol plus lorazepam is that these meds can be administered in one syringe. When diphenhydramine or benztropine are mixed with haloperidol, a precipitate forms within minutes, leading most hospital pharmacies to recommend separate syringes.

Olanzapine (Zyprexa)
Olanzapine is an effective option whether given orally (especially in its ODT form, Zyprexa Zydis) or IM. We like it because it has a low incidence of dystonia and we can safely use it as monotherapy. A four-way comparison of IM agents found that olanzapine was equally effective as the haloperidol/midazolam combination, and that both options were more effective than either ziprasidone or haloperidol plus promethazine (Mantovani C et al, J Clin Psychopharmacol 2013;33(3):306–312). Highly agitated patients may not respond to maximal doses of IM Zyprexa, in which case a benzodiazepine can be added, but with caution (Editor’s note: See the callout box below).

Ziprasidone (Geodon)
IM ziprasidone appears less effective than IM olanzapine or the IM haloperidol/benzo combination (Mantovani et al, 2013). Ziprasidone was the least effective at reducing scores on the Positive and Negative Syndrome Scale Excited Component (PANSS-EC) in a meta-analysis of randomized controlled trials that examined various pharmacologic treatments for acute agitation (Bak et al, 2019). A concern with ziprasidone is that it increases the risk of QTc prolongation in patients with other risks for QTc ­prolongation.

Aripiprazole (Abilify)
Aripiprazole is no longer available in the short-acting IM version as it was withdrawn by the manufacturer due to poor sales. Drawbacks include the potential to be activating and a lower efficacy rate compared to other second-generation agents for managing agitation (Wilson et al, 2012).

Chlorpromazine (Thorazine)
Chlorpromazine, the first antipsychotic to be developed, has a long track record of use for agitation, especially in its IM form. This medication’s main advantage is a low EPS risk. Its drawbacks include a QTc prolongation similar to haloperidol’s, potential orthostatic dizziness, and a lowered seizure threshold. While these side effects lead some authorities to discourage its use, in the real world of inpatient psychiatry we find that many of our agitated patients respond better to Thorazine than any other agent.

Droperidol (Inapsine)
Droperidol was a reasonable second-line option in the past, but its use was discontinued due to concern that it causes QTc prolongation. However, recent studies have found that its QTc prolongation is no greater than that caused by other antipsychotic medications (Khokar MA et al, Cochrane Database Syst Rev 2016;12:CD002830). A recent randomized controlled study found that IM droperidol was more effective than IM lorazepam or IM ziprasidone, with less respiratory depression (Martel ML et al, Acad Emerg Med 2021;28(4):421–434). Another advantage of droperidol is that its onset of efficacy is fast, within 5–10 minutes; in comparison, haloperidol typically takes about 20–30 minutes to demonstrate an effect. We expect that droperidol will make a comeback, but the FDA’s black box warning (which still has not been revised) will probably limit its use.

Quetiapine (Seroquel)
There are no RCT data on oral quetiapine for agitation, except for one study showing quetiapine 200 mg/day was effective for agitation due to dementia (Zhong KX et al, Curr Alzheimer Res 2007;4(1):81–93). Quetiapine’s high rate of orthostatic hypotension makes it less than ideal when working in the ED, as patients are often volume depleted (Wilson et al, 2012). We monitor blood pressure closely when we prescribe it for our elderly patients. In our experience, at doses of 100–300 mg, quetiapine is helpful in reducing agitation among patients who are willing to take oral medications. Some patients will ask for quetiapine specifically because it has helped them calm down in the past, and it is reasonable to honor such requests.

Benzodiazepine monotherapy for agitation is highly effective. Studies from the 1990s show that IM lorazepam is equivalent to IM haloperidol or IM haloperidol plus benztropine (Battaglia J et al, Am J Emerg Med 1997;15(4):335–340). Lorazepam is the most commonly used benzo for agitation because it rarely causes hypoxia, even when combined with haloperidol or risperidone. Midazolam IM is faster acting but is best avoided in psychiatric units as it has a short half-life—patients may require multiple doses, placing them at risk for respiratory suppression.

Promethazine (Phenergan)
While promethazine has been used to counter extrapyramidal symptoms from haloperidol, we believe diphenhydramine or benztropine are better choices. Promethazine has antidopaminergic properties and has been linked with neuroleptic malignant syndrome (Mendhekar DN and Andrade CR, Aust N Z J Psychiatry 2005;39(4):310).

Hydroxyzine (Atarax), diphenhydramine (Benadryl)
These anticholinergic agents are sometimes administered orally for mild agitation. However, no controlled studies have examined their efficacy. Since they are sedating and relatively safe, we see no reason not to use these for mild levels of agitation. However, be aware that they will exacerbate anticholinergic and cardiac conduction side effects when used in combination with antipsychotic medications.