Buprenorphine is notorious for precipitating withdrawal in patients who have recently taken opioids. Its high receptor affinity and partial agonism at the mu receptor can make inductions tricky. Giving it too soon can cause severe withdrawal, yet giving it too late means patients are in discomfort from withdrawal while awaiting their first buprenorphine dose. A fair number of inductions result in some level of precipitated withdrawal (estimates range from 5% to 16.8%), and it has been speculated that the higher prevalence of fentanyl on the street has increased this rate even further. But there may be an alternative.

This review examined a novel approach, called microinduction, for transitioning patients to buprenorphine from an opioid agonist like methadone or heroin. In this strategy, microdoses of buprenorphine (0.2–0.5 mg) are introduced and gradually increased without waiting for withdrawal to start. Microinduction is based on the theory that multiple small doses of buprenorphine, given its high receptor affinity, will gradually replace the lower-affinity opioid that is occupying the mu receptor sites. This gradual change from full to partial agonist causes a less dramatic physiological shift, and hence fewer withdrawal symptoms. In contrast, a single large dose of buprenorphine will quickly replace the opioid and result in a sudden drop in agonist signaling.

This literature review examined 18 reports (n = 63) of various buprenorphine microinduction strategies. The individual studies were quite heterogeneous, varying in opioid agonists, buprenorphine dosing, and time course. However, they all started with very low doses of buprenorphine (0.2–0.5 mg) and increased this dose slowly over time (3–112 days). Most transitioned over 4–8 days and stabilized patients on daily buprenorphine doses of 8–16 mg. Some utilized symptomatic treatment with clonidine during the induction period.

The review highlights a few situations in which microinduction might be particularly beneficial, namely when transitioning to buprenorphine from methadone and for patients with chronic pain. The long half-life of methadone makes for an extended withdrawal period when utilizing traditional buprenorphine induction. Patients in this study were transitioned from methadone doses as high as 200 mg without requiring prior decrease of dose. Patients hospitalized for medical or surgical conditions could transition from illicit opioids without withdrawal. Individuals with chronic pain were transitioned without having to endure an increase in pain during the opioid withdrawal period. 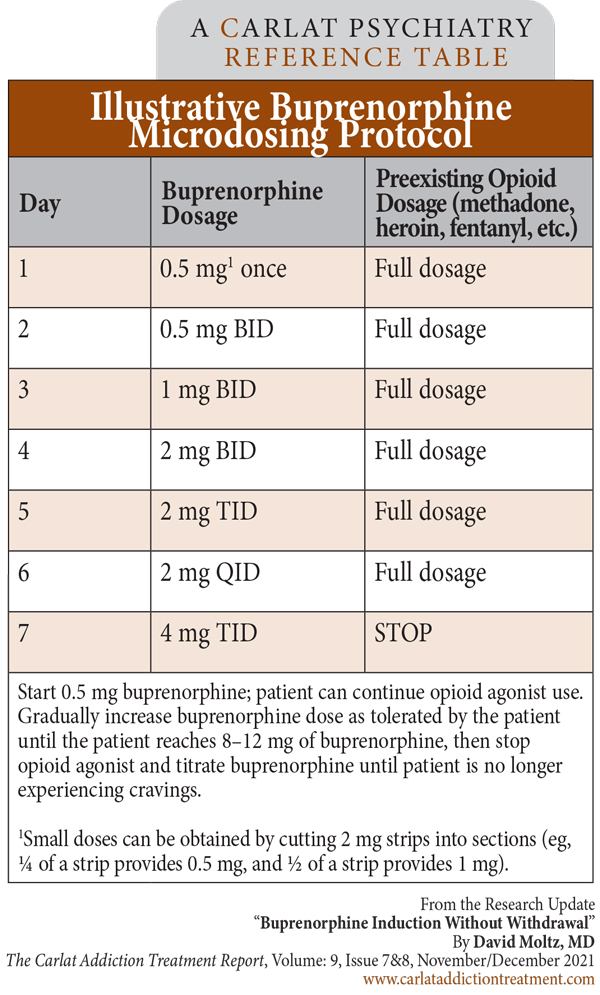 Before we jump to microinduction for all of our patients, there are caveats to consider. All of these papers were case reports or case series, with only one open-label trial. Most did not evaluate withdrawal with validated measures. There is no standard protocol for microinduction and no randomized trials comparing microinduction to the usual method of induction. Nevertheless, this review shows the promise of this technique as an alternative for safe, effective initiation of buprenorphine treatment.

CATR’s Take
While not yet standard of care, microinduction could be considered for patients who are difficult to induce. However, there is still work to do in standardizing and validating this approach.
Addiction Treatment
KEYWORDS buprenorphine buprenorphine-induction medication-of-opioid-use-disorder-moud opioid-use-disorder
David Moltz, MD.
More from this author