A Diet for ADHD

The authors have disclosed no relevant financial or other interests in any commercial companies pertaining to this educational activity.

Bestselling books have promised a dietary cure for ADHD since 1975’s Why Your Child Is Hyperactive, but separating the science from the snake oil is no easy task. In this article, we walk you through three nutritional approaches to ADHD: elimination diets, dietary supplements, and the heart-healthy DASH diet. All have some empiric support, and at least one of them is ready for practice.

The first ADHD diet was proposed by Ben Feingold, a prominent allergist and author of the 1975 bestseller mentioned above. Feingold was trying to help patients who were allergic to salicylic acid (aspirin) by having them eliminate salicylate-rich foods, including tomatoes, cucumbers, and oranges, as well as artificial food colorings that resembled salicylate. In the process, he noticed that his patients with comorbid ADHD experienced a full remission of the psychiatric syndrome.

Feingold’s diet was tested in over a dozen small controlled trials of ADHD, but the results were mixed and a meta-analysis came up negative. However, studies that focused on eliminating artificial colors were generally positive, yielding a small effect size (0.28) across 15 small, double-blind crossover trials that tested children on and off this elimination approach (Schab DW and Trinh NHT, J Dev Behav Pediatr 2004;25(6):423–434).

Later studies found that artificial colorings could cause ADHD symptoms in children without ADHD. Those studies also added sodium benzoate to the list (a preservative and flavor enhancer found in packaged sauces, snacks, and sodas). In response, several countries banned food colorings and the European Union placed warnings on foods containing them (Rytter MJH et al, Nord J Psychiatry 2015;69(1):1–18). Although Feingold hypothesized that this was an allergic phenomenon, these additives also have pharmacologic-like mechanisms, inhibiting enzymes involved in the metabolism of dopamine and norepinephrine (Eagle K, Physiol Behav 2014;135:174–179).

Circling back to the allergy theory, several studies tested the effects of allergy-inducing foods like dairy, wheat, eggs, chocolates, nuts, and citrus fruits on ADHD. This approach found support in three small, blinded crossover trials where children eliminated the food for two to three weeks and then reintroduced either the original food or a placebo food. A similar on/off approach is sometimes used to test these foods in practice. If the food is causative, symptoms usually return within a few hours to a few days of its reintroduction (Stevens LJ et al, Clin Pediatr(Phila) 2011;50(4):279–293).

Other research has linked ADHD to chemicals that leach into foods from cans and plastic containers, but these associations are limited to epidemiologic and animal studies. A controlled trial in humans would be unethical because these chemicals, which include bisphenol A (BPA), phthalates, and phenols, have neurotoxic, carcinogenic, and endocrine-disrupting effects (Moore S et al, Int J Environ Res Public Health 2022;19(5):2849).

In summary, artificial colorings, sodium benzoate, and chemicals like BPA are best avoided as they can worsen cognition in anyone. Allergy-inducing foods, in contrast, are probably only relevant to patients with food allergies, and identifying those patients is difficult and time-consuming.

Children with ADHD are more likely to have low levels of iron, magnesium, omega-3 fatty acids (fish oil), and zinc, but can supplementation with these nutrients improve ADHD? Most of the investigations into this area suffer from poor designs and inconsistent results, but meta-analyses did find a small benefit when omega-3 fatty acids (12 trials, total n=735) and zinc (seven trials, total n=727) were used to augment stimulant medications (Bloch MH and Qawasmi A, J Am Acad Child Adolesc Psychiatry 2011;50(10):991–1000).

Omega-3 fatty acids come in two forms—docosahexaenoic acid (DHA) and eicosapentaenoic acid (EPA)—and most of the positive trials used higher amounts of EPA, around 600 mg/day. We saw a similar pattern in depression, where only the trials with a high ratio of EPA:DHA (at least 2:1) trended positive.

The typical dose in the zinc studies was 15 mg/day of zinc gluconate, glycinate, or sulfate. These studies may not apply in the US, however, where only 12% of the population is deficient in zinc. The only US trial of zinc was negative, while the positive trials were carried out in countries where nearly half the population is deficient in zinc: Chile, Iran, and Turkey (Granero R et al, Nutrients 2021;13(11):4059).

Zinc deficiency may be rare in the US, but the Western diet is pervasive here, with its heavily processed foods that are rich in simple sugars, salt, and unhealthy fats. The Western diet is associated with diabetes, heart disease, depression, and age-related cognitive decline, and a 2011 study added ADHD to that list. This study followed a cohort of 2,868 Australian children from birth to age 14. Those raised on a Western diet were 2.2 times more likely to develop ADHD (Howard AL et al, J Atten Disord 2011;15(5):403–411).

The Australian study adjusted for confounding variables like physical activity, caloric intake, and the educational and financial status of the parents, but it could not rule out the possibility that children with ADHD are simply more likely to eat unhealthy foods. That explanation was addressed last year in a randomized trial that tested the heart-healthy Dietary Approaches to Stop Hypertension (DASH) diet in 80 Iranian children with ADHD who were not taking medication (Khoshbakht Y et al, Eur J Nutr 2021;60(7):3647–3658).

The DASH diet was developed for hypertension, but the foods it emphasizes are also associated with lower rates of ADHD in epidemiologic studies: fruits, vegetables, fish, whole grains, nuts, and beans. It is also low in food dyes, additives, and the hallmarks of the Western diet: sugar, salt, saturated fats, cholesterol, and refined grains. The children were randomized to the DASH diet or a control diet that was similar enough in its rigor and caloric requirements to pass as a blinded placebo. Compared to controls, those on the DASH diet had significant improvements on multiple parent-, teacher-, and child-rated measures of ADHD after three months. They also had more prosocial behaviors and fewer conduct problems.

Fifty years of research has brought three dietary approaches to ADHD, so where to begin? The DASH diet has several advantages. It is risk-free, easy to implement, and has numerous health benefits. It is also likely to translate to the adult population. The DASH diet was associated with cognitive benefits in epidemiologic studies of adults and is similar to the Mediterranean-style diet that improved adult depression in several controlled trials (van den Brink AC et al, Adv Nutr 2019;10(6):1040–1065). We’ve blended the DASH diet along with foods to avoid in ADHD (artificial colors, sodium benzoate, and BPA) in the patient-friendly table on page 4. 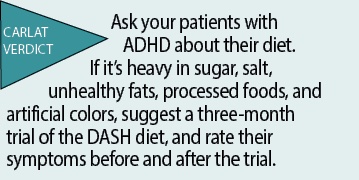 This diet delivers plenty of omega-3s, but dietary sources are usually low in the EPA fatty acids needed for mood and ADHD, so supplementation may still be beneficial (see The Carlat Psychiatry Report March 2022 for EPA-rich products). Minerals like zinc may help when there is a deficiency, and avoiding ­allergy-inducing foods may help when the patient has an identified allergy.