A New Treatment for Bipolar Depression

From The Carlat Psychiatry Report
Issue Links: Learning Objectives | Editorial Information | PDF of Issue
On May 28, 2019, cariprazine (Vraylar) became the fourth atypical antipsychotic to receive FDA approval for bipolar depression. The approval was based on two randomized controlled trials involving 1,051 patients and lasting 6–8 weeks. These studies grouped patients into fixed doses from 0.75–3 mg/day. The sweet spot seems to be 1.5 mg/day, which was more effective than the 0.75 mg dose and about equal to the 3 mg. There was a trend toward greater efficacy with the 3 mg dose, but also toward more adverse effects (Earley W et al, Am J Psych 2019;176:439–448; Durgam S et al, Am J Psych 2016;173:271–281).

Among the atypicals, only cariprazine and quetiapine are approved for both the manic and depressed phases of the illness. The other two atypicals for bipolar depression have either never been studied in mania (lurasidone) or contain an antidepressant that could make mania worse (olanzapine-fluoxetine combination).

Like aripiprazole (Abilify) and brexpiprazole (Rexulti), cariprazine is a partial agonist at D2 and D3 dopamine receptors, but only cariprazine is selective for D3. This is important because the D3 receptor is involved in motivation and pleasure, the so-called “hedonic drive.” Cariprazine acts as an agonist at D3 when dopamine levels are low, and an antagonist when they are high.

So far, this unique mechanism has not translated into unique efficacy for cariprazine, which has a number needed to treat comparable to that of the other atypical antipsychotics. Instead, tolerability is likely to drive the choice in this class. Cariprazine and lurasidone are more likely to cause akathisia and nausea, while quetiapine and the olanzapine-fluoxetine (OFC) combo carry greater risks of sedation, weight gain, and metabolic problems.

To prevent akathisia, I titrate cariprazine slowly, starting at 1.5 mg every other day and raising to the target dose of 1.5 mg daily after a week. Cariprazine is only available as a capsule, and the smallest size is 1.5 mg, but it has a long half-life of 2–4 days, so dosing every other day can effectively achieve a lower dose.

Cariprazine and lurasidone are brand-only, and in my experience about half of the insurers require prior authorization for these otherwise unaffordable medicines. Quetiapine and the OFC combo are both generic, but some insurers do not cover the OFC combo because the two ingredients are usually cheaper when prescribed separately. 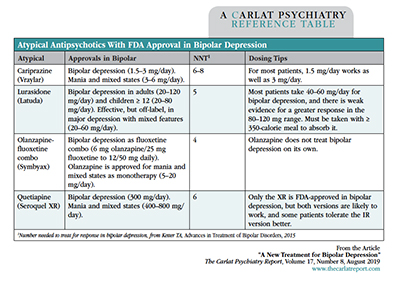