Home » Adult ADHD: What Else Could It Be?

Adult ADHD: What Else Could It Be?

In this issue, we tackle one of the vexing problems in outpatient psychiatry: adults who present with ADHD. Some of these patients can trace their symptoms back to their childhood or teenage years, and these patients may indeed have legitimate ADHD. However, ADHD symptoms are hard to pin down. They change significantly through a person’s lifespan, and many adult psychiatric disorders can mimic the symptoms of ADHD.

Clinical approach to adult ADHD symptoms
How should you approach the diagnosis of an adult who complains of distractibility and poor focus? While ADHD may be a possibility, I suggest you start by ruling out other potential causes, which I have listed in the table at right.

One overlap that’s particularly difficult to untangle is ADHD and bipolar disorder. About 1 in 5 patients with bipolar disorder do have genuine ADHD. In those cases, the ADHD symptoms can be traced back to childhood and remain stable between the bipolar episodes. Outside of that overlap, cognitive problems are common in bipolar disorder. They often persist after the mood episodes resolve, and worsen as the number of episodes increases.

Of course, in psychiatry (as in life) nothing is simple, and these alternative explanations of ADHD symptoms are sometimes the products of underlying ADHD. For example, substance abuse and head injuries can cause an ADHD-like picture, but ADHD is also a potential cause of accidents and impulsivity. Sleep deprivation causes ADHD symptoms, but insomnia, restless legs syndrome, and procrastination-induced all-nighters are more common in ADHD. Obesity impairs cognitive function through effects on the hippocampus and prefrontal cortex, but ADHD is a risk factor for obesity (Cortese S et al, Am J Psychiatry 2016;173(1):34–43). 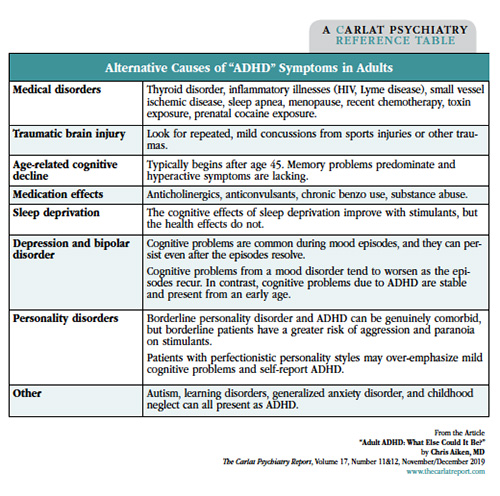 View as a full-size PDF.