Transdermal medications are thought to reduce side effects by avoiding “first-pass” metabolism in the GI tract. This is unlikely to be an advantage for Secuado, however, because the sublingual form of asenapine (Saphris) already avoids the first-pass effect by absorbing through the buccal membrane. Compared to placebo, Secuado’s side effect profile looks identical to Saphris, except that it adds one more: skin irritation (15%). Still, some patients may prefer it to Saphris, which is notorious for its unpleasant taste that is not always masked by its black cherry flavoring.

The main difference between Saphris and Secuado is in their pharmacokinetics. Saphris comes on fast, peaking within an hour, while Secuado takes 12–24 hours to reach peak levels. Peak levels are associated with side effects, however, not efficacy. Some patients do better with lower levels spread out over a long time (Secuado), while others prefer the rapid up and rapid down of Saphris. In other words, Secuado is to Saphris as Seroquel XR is to Seroquel IR.

Secuado’s advantages over Saphris are dampened when Saphris is given as a single nightly dose. This minimizes fatigue by concentrating the side effects in the evening. Although it’s recommended to divide Saphris twice daily, there is little reason to do so either in schizophrenia or bipolar disorder. Antipsychotics can be given in a single daily dose without loss of efficacy, according to 4 randomized controlled trials (Takeuchi H et al, J Clin Psychiatry 2014;75(5):506–511). That is true for antipsychotics with short half-lives like perphenazine and clozapine, and makes even more sense with the 24-hour half-life of Saphris.

Secuado and Saphris have never been directly compared, but industry-sponsored papers touting the benefits of the transdermal form are already on the march (Citrome L et al, J Clin Psychiatry 2019;80(4)). Caution: These papers draw their arguments from transdermal systems designed for other diagnoses like ADHD and dementia. There the comparison is an oral medication given twice a day, not a sublingual one given all at night. Secuado may be right for patients whose side effects are tied to asenapine’s peak plasma levels. Otherwise, Saphris is the better choice, particularly after December 2020 when it is expected to go generic. 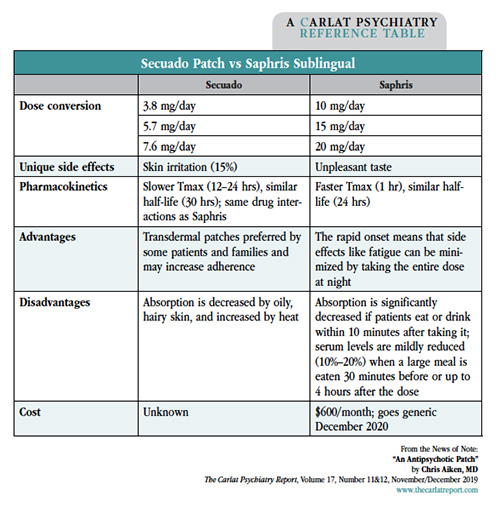 A Practical Guide to Light Therapy