Home » Oxcarbazepine: Close, but no Cigar

Oxcarbazepine: Close, but no Cigar

From The Carlat Psychiatry Report
Issue Links: Learning Objectives | Editorial Information | PDF of Issue
You are selecting a mood stabilizer for a 29-year-old woman with mania. If it works, she’ll need to take it long term, but with adherence rates hovering around 50% in this illness, that’s not a likely prospect. The FDA-approved options are not very high on tolerability, but what about oxcarbazepine?

Oxcarbazepine (Trileptal) is often used in bipolar disorder in place of its FDA-approved cousin, carbamazepine (Equetro, Tegretol). The thinking is that oxcarbazepine is safer, better tolerated, and less prone to drug interactions. However, those assumptions don’t quite hold up to the facts, and there’s a pile of unpublished research that raises questions about whether oxcarbazepine even works.

Oxcarbazepine, carbamazepine: What’s the difference?
Oxcarbazepine and carbamazepine differ by only a single carbonyl bond, so it seems intuitive that they should have similar clinical effects. However, small differences like this can sometimes be profound. For example, imipramine and chlorpromazine differ only in two bonds, but the former is an antidepressant and the latter an antipsychotic. Oxcarbazepine and carbamazepine actually target different sodium channels, so there’s reason to doubt that they have overlapping clinical effects.

Does oxcarbazepine work?
Most experts say that oxcarbazepine does not treat bipolar disorder because it failed to work in two ­placebo-controlled trials. However, there are problems with those studies. The first was small (n = 55) and tested oxcarbazepine’s long-term preventative effects as an add-on to lithium. Lithium is very effective in the maintenance phase, so it may have washed out any benefits of the additional oxcarbazepine (Vieta E et al, Int J Neuropsychopharmacol 2008;11(4):445–452).

The second study evaluated oxcarbazepine’s acute antimanic effects in children and adolescents. It is the only large study of oxcarbazepine in bipolar disorder (n = 116), but only 62% of the subjects completed the study. To the drug’s credit, there were more dropouts in the placebo group, and oxcarbazepine outperformed placebo with a response rate of 42% vs 26%, but the better performance was not statistically significant (Wagner KD et al, Am J Psychiatry 2006;163(7):1179–1186).

Another flaw of the pediatric study is that it recruited from 20 research sites. Too many sites can cause studies to fail. When each site has only a handful of subjects, those subjects tend to get more attention, which enhances the placebo response. It’s also harder to keep the methods consistent across each site. The same authors conducted a similar multisite study of ­valproate in pediatric mania, and the active treatment failed to separate from placebo there as well.

Oxcarbazepine performed better when it was compared to other mood stabilizers instead of to a placebo. In nine studies involving 318 subjects, it worked as well as lithium, valproic acid, carbamazepine, and haloperidol in mania and mixed states (seven studies), hypomania (one study), or the maintenance phase (one study) (Vasudev A et al, Cochrane Database Syst Rev 2011;12:CD004857). The best results were achieved when oxcarbazepine was used to augment lithium in mania, where it actually outperformed carbamazepine.

The main limitation of these studies is that they were small and lacked a placebo control. Without a placebo, we don’t know if the improvements in both groups were due to nonspecific factors. Simply entering the structured setting of a controlled trial can improve manic symptoms.

Oxcarbazepine may have a role in specific symptoms. For example, it reduced impulsivity and aggression in small, placebo-controlled studies of patients with and without bipolar disorder (Mattes JA, J Clin Psychopharmacol 2005;25(6):575–579).

Table: How to Use Oxcarbazepine in Bipolar Disorder 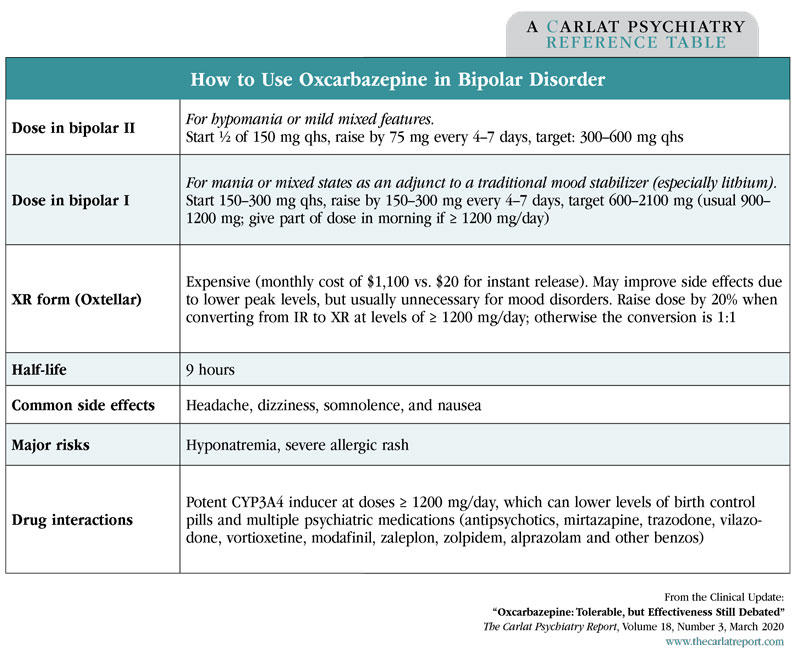 What about safety?
The hope of oxcarbazepine is that it’s close enough to carbamazepine to treat bipolar, but different enough to be safer and more tolerable. There’s a grain of truth to that.

Oxcarbazepine was about 20% less likely to cause side effects than carbamazepine in the studies that compared the two drugs, both in epilepsy and bipolar disorder. The side effects it did cause were similar to those seen with carbamazepine: headache, dizziness, somnolence, nausea, and rash. Side effects are most likely to occur in the first 4 weeks of treatment and tend to be transient.

In terms of safety, oxcarbazepine is better in some respects and worse in others. It has a higher risk of hyponatremia. The risk of severe hyponatremia (Na < 125) is 1.3% for oxcarbazepine vs 0.1% for carbamazepine; for mild, it’s 30% vs 15%. Severe hyponatremia can lead to seizures, coma, and death. Annual electrolyte checks will catch some cases of hyponatremia in the early stages but miss the majority, so warn patients of the signs: malaise, nausea, dizziness, and headache.

On the other hand, the aplastic anemia and agranulocytosis seen with carbamazepine (at a rate of 1 in 100,000) are not seen with oxcarbazepine. Both medications carry a risk of rash, Stevens-Johnson syndrome, and elevated liver enzymes. Patients of Asian descent should be screened for the HLA-B*1502 allele, as this confers an increased risk of severe skin reactions with both carbamazepine and oxcarbazepine.

Oxcarbazepine is also thought to lack the problematic drug interactions of carbamazepine. As a potent inducer at CYP3A4, carbamazepine renders many medications nearly ineffective, including antidepressants and antipsychotics. However, oxcarbazepine also induces CYP3A4 in the higher dose range that’s usually needed for mania (≥ 1200 mg/day). It’s a less potent inducer than carbamazepine—about 50% less so—but this is no reassurance when it comes to the CYP3A4 interaction with the highest stakes: oral contraceptives.

More practical tips on how to use oxcarbazepine are in the table on page 2.

TCPR Verdict: Oxcarbazepine sits on a pile of flawed studies in bipolar disorder. We can’t say that it works, but we can’t rule it out. Avoid using it as the sole mood stabilizer, particularly in bipolar I disorder. It may have a role as an augmentation therapy in mania and mixed states, but even then it is third line. Oxcarbazepine has slightly fewer side effects and drug interactions than carbamazepine, but it’s not safer—hyponatremia is common and dangerous when taking oxcarbazepine.

Listen to the Podcast Episode


The Choice: Oxcarbazepine or Carbamazepine in Bipolar