Two new psychiatric medications were approved in the final days of 2019. One is the first of its kind, an antipsychotic with minimal dopaminergic blockade: lumateperone (Caplyta). The other is lemborexant (Dayvigo), a variation on the hypnotic suvorexant (Belsomra).

Lumateperone (Caplyta)
Though classified as an atypical antipsychotic, lumateperone is unusual in that it treats psychosis without significant dopamine (D2) blockade. Its receptor occupancy at D2 is 39%, while most antipsychotics occupy D2 at 60% and above (Vanover KE et al, Neuropsychopharmacology 2019;44(3):598–605). The other exceptions to this rule are clozapine and quetiapine—both of which are light on dopamine blockade and heavier on serotonergic (5-HT2A) antagonism—and pimavanserin (Nuplazid), an inverse agonist at 5-HT2A that is approved for Parkinson’s psychosis.

Besides its low affinity for D2, lumateperone also works as a partial agonist at D2 when it binds there. In that respect it resembles aripiprazole, brexpiprazole, and cariprazine, although its agonist activity was significantly less than aripiprazole and brexpiprazole in a head-to-head comparison (Zhang L and Hendrick JP, Matters 2018;10.19185).

Lumateperone’s mechanism of action predicts a favorable tolerability profile, and the available studies back that up. Sedation is the main risk, affecting 1 in 8 patients (based on number needed to harm). Those numbers improved when the company wisely switched from morning to evening dosing in their later studies. Other common side effects include nausea (9% vs 5% on placebo), dry mouth (6% vs 2%), and dizziness (5% vs 3%). Notably absent are extrapyramidal side effects, akathisia, weight gain, metabolic disturbances, and prolactinemia in studies lasting up to 1 year.

Lumateperone improved symptoms of schizophrenia in three out of four randomized controlled trials. The negative trial was deemed a “failed trial” due to a high placebo response rate (specifically, it included a risperidone arm that also failed to separate from placebo). When compared to risperidone 4 mg/day in another trial, lumateperone worked equally well on positive psychotic symptoms and slightly better on negative symptoms (Corponi F et al, Eur Neuropsychopharmacol 2019;29(9):971–985; Citrome L, CNS Spectr 2016;21(S1):1–12). That’s good news, as risperidone usually ranks alongside olanzapine as one of the more effective atypicals. On the other hand, lumateperone’s benefits were less impressive in a large placebo-controlled trial where it had only a small effect size (0.3) in schizophrenia (Correll CU et al, JAMA Psychiatry 2020; Jan 8).

Lumateperone is given once daily as a 42 mg capsule without titration. Lower (28 mg) and higher doses (84 mg) did not work. Taking it with food may improve tolerability by dampening and delaying the peak blood level, but this is not necessary for absorption, unlike drugs such as lurasidone and ziprasidone. It is metabolized through CYP3A4 and isn’t known to have active metabolites. A long-acting injectable is in development, and FDA approval is being pursued for bipolar depression and behavioral disturbances in dementia.

TCPR’s Take
After 60 years of development, we’ve yet to see an effective antipsychotic that didn’t come with serious risks. Contenders have risen and fallen: risperidone, aripiprazole, ziprasidone. Lumateperone is the latest to claim that title, and time will tell if it lives up to those expectations. In terms of efficacy, its four trials are a mix of good and bad news, and its real-world benefits are yet to be tested.

Lemborexant (Dayvigo)
Lemborexant attempts to improve on some of the pitfalls with sleep medications (especially the so-called “z-hypnotics” like zolpidem): falls, traffic accidents, memory impairment, and next-day sedation, problems that pose particular risks in the elderly. Like suvorexant (Belsomra), lemborexant works by blocking orexin, a neuropeptide that increases wakefulness and appetite. Both are competitive antagonists at the orexin 1R and 2R receptors. One difference is that lemborexant has an active metabolite, M10, which has similar effects on the orexin receptors.

Lemborexant was effective in two randomized, placebo-controlled trials that involved close to 2,000 subjects and lasted 1 to 12 months. One of those studies included a zolpidem (Ambien) arm. Both 5 mg and 10 mg doses of lemborexant outperformed zolpidem on subjective and objective measures of sleep initiation and maintenance. Suvorexant has also gone head-to-head with zolpidem, where it proved better at maintaining sleep but less effective at initiating it. On the surface, those results imply that suvorexant is a less powerful hypnotic, but keep in mind it went head-to-head with high-dose, instant-release zolpidem (10 mg) while lemborexant was compared to low-dose, controlled-release zolpidem (6.25 mg).

The orexin mechanism suggests a better safety profile and less addictive potential than the z-hypnotics. Based on the research on suvorexant, this class appears to lack tolerance and withdrawal effects, but may actually have an abuse potential that’s similar to the z-hypnotics. Both lemborexant and suvorexant have gone through placebo-controlled trials in the elderly, and no new safety concerns were found in that vulnerable population (Herring WJ et al, Alzheimers Dement 2020;10.1002). Lemborexant has gone head-to-head with z-hypnotics, where it proved less likely than zolpidem to cause imbalance after middle-of-the-night awakening, and less likely to impair driving the next morning compared to the European z-hypnotic zopiclone.

TCPR’s Take
Orexin antagonists improve on the safety of older hypnotics, but the new addition to this class offers no clear advantage over its predecessor. It will take a year or two of post-market surveillance to get to know lemborexant better. Until then, suvorexant, which has stood the test of time since 2014, is the safer choice in this class. 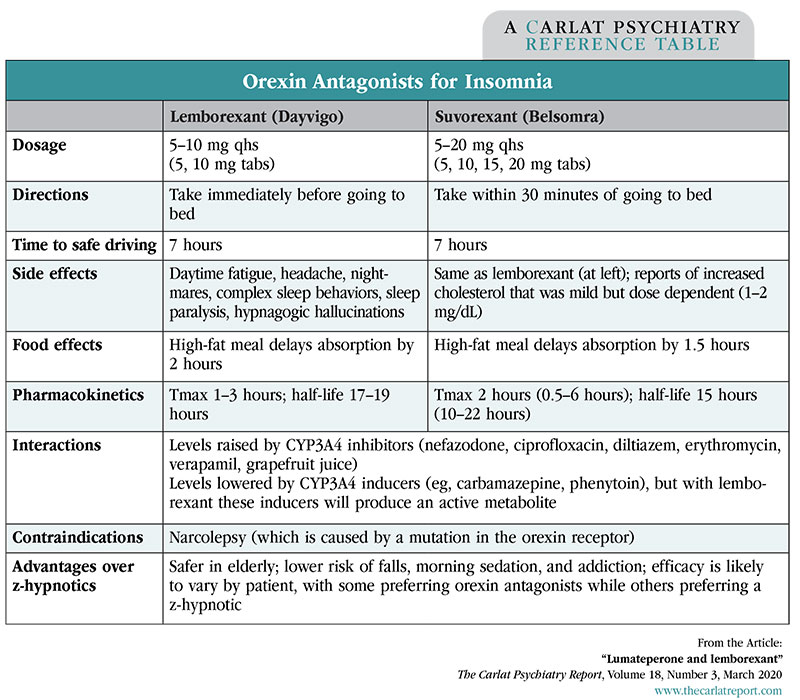