Learning From the Successes of Physician Health Programs

From The Carlat Addiction Treatment Report
Issue Links: Learning Objectives | Editorial Information
The rate of substance use disorders among physicians is around the same if not slightly higher than in the general population. Impaired physicians, however, are a public health threat, and in most states there is mandated reporting of impaired ­physicians (­Mossman D, Current Psychiatry 2011; 10(9):67–71). So what is to be done for an addicted or impaired physician? Physician health programs (PHPs) can help. Here, we review the successes of PHPs and identify features of these successes that can be applied in the addiction clinic for the general population.

What is a PHP?
PHPs are state-sponsored programs that operate under the authority of a medical licensing board. Currently, all but three states (California, Nebraska, Wisconsin) have PHPs, and California recently announced that its PHP will be reinstated (www.tinyurl.com/urrfekp). These programs evolved in the 1970s as a reaction to increasing disciplinary action against doctors, providing an avenue for impaired physicians to instead seek treatment, maintain their licenses, and rehabilitate their lives and careers. 55% of doctors enrolled in a PHP are mandated to enroll by a licensing board, hospital, or other agency, but the other 45% are self-referred or referred by friends, family, or colleagues (FSPHP.org). After referral, PHP staff conduct an evaluation and issue treatment recommendations, which may involve temporary discontinuation of practice, residential detoxification and rehabilitation, and long-term monitoring. Although PHPs have no direct authority over licensure, following their recommendations may result in avoiding punitive measures. While PHPs often work with medical licensing boards at an organizational level, the medical licensing board is often not notified that individual physicians are receiving treatment from the PHP. For more details about PHPs, please see the “Key Elements of PHPs” table below. 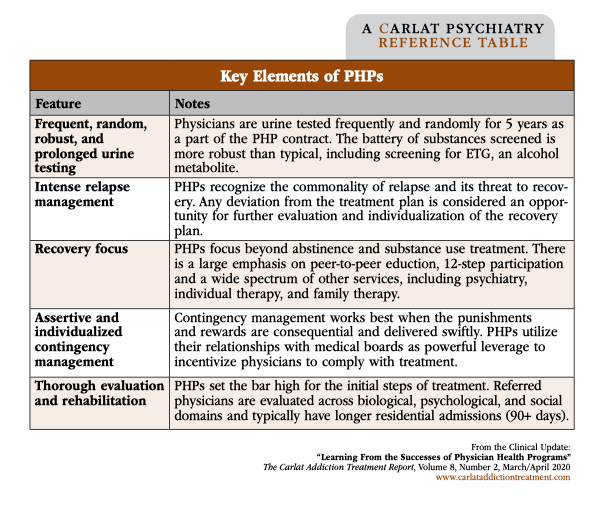 Success rates
PHPs boast impressive success rates for addiction treatment. Over 95% of enrollees cooperate with treatment, and 75%–85% return to work (FSPHP.org). In a study of 16 PHPs, results were a little less stellar, but still impressive: 72% of enrollees were licensed and practicing medicine after 5 years, and 78% of participants were completely abstinent (DuPont RL et al, JSAT 2009;36(2):159–171). The two most common presenting substance use disorders are alcohol use disorder (AUD) and opioid use disorder (OUD). Success rates are consistent across all presenting substance use disorders and superior to the general population in terms of abstinence, treatment retention, and other various components of recovery. So what is different about these programs?

Typical components of PHPs
Although there are slight state-by-state variations, PHPs share many common features. After the initial referring report is investigated for legitimacy, the physician is asked to complete an evaluation that results in recommendations for treatment; the medical licensing board is generally not notified. This guarantee of protection can help alleviate some of the denial and delay in seeking treatment. The program requirements are, however, intensive and of long duration. Treatment starts with detoxification and inpatient rehab, usually for at least 90 days. A North Carolina study comparing the health programs for addicted physicians and physician assistants (PAs) found that 91% of physicians had a “good outcome” compared to only 59% of PAs; the large disparity in outcomes was deemed partially attributable to physicians undergoing longer and more intensive initial treatment than the PAs (Ganley OH et al, J Add Dis 2005;24(1):1–12).

After completing initial rehabilitation, physicians generally undergo a 5-year contract, including intensive monitoring in the context of a consent agreement. Urine testing is frequent and random, and screens encompass a panel of over 20 substances, including ETG (a sensitive biomarker of alcohol consumption; see CATR Jan/Feb 2020). For the entire duration of the PHP contract, physicians must call a phone number each work day to learn if they’ve been selected for random testing, which occurs on average once a week at the start of the contract and once a month after prolonged abstinence. Other stipulations of the contract may include regular 12-step attendance (multiple times per week).

PHPs wield considerable leverage by serving as the primary protection against discipline by licensing boards, hospitals, and insurance companies. This leverage is utilized to ensure compliance with all PHP recommendations. Missing any treatment session or drug test is considered a return to use, and consequences are immediately rendered. Treatment is abstinence-based. An emphasis is placed on relapse management, and the typical recommendation after return to use is a 90-day residential program.

Application of PHP principles
The success of PHPs has inspired other professional groups. Lawyers and commercial pilots have adopted comparable programs. Several drug courts, as well as programs such as Hawaii Opportunity Probation and Enforcement (HOPE) and South Dakota’s 24/7 Sobriety, have found success within the criminal justice population through implementation of similarly robust contingency management—noncompliance with treatment or urine testing can result in immediate brief jail stays. General addiction providers could implement similar structure by requiring more frequent random drug testing and rigidly enforcing consequences such as additional follow-up or limiting take-home doses as a response to skipped urine screens, missed appointments, or abnormal drug test results. However, PHP principles may not be universally applicable, particularly in cases where ­harm-reduction approaches may be more suitable than abstinence-only approaches.

Corporatization
Not everyone views PHPs as the holy grail of addiction treatment. There have been important questions raised about growing corporatization and profiteering within the system (Boyd JW; www.tinyurl.com/wydv3a4), which in turn lead to concerns about conflicts of interest regarding the initial evaluations as well as reporting of results. Additionally, PHP services are generally paid for by the impaired physician, and costs over the course of treatment and monitoring can be exorbitant. Although criticisms of this nature have been mostly speculative and anecdotal, the monopolistic nature of a singular state-run program and the lack of a transparent appeals process can be interpreted as coercive.

Treating OUD with opioid agonists
An additional critique is how PHPs treat OUD. While nationally PHPs do not have a blanket ban against the use of opioid agonists (methadone and buprenorphine) for the treatment of OUD, many individual PHPs do not allow them. Although some studies point out that those agonist treatments can impair cognitive functioning, it is unclear if there is real-world significance or if the impairment is any worse than what is seen with antidepressants or antihypertensives (Hamza H and Bryson EO, Mayo Clin Proc 2012;87(3):260–267). These PHPs’ stances against agonist treatment could be deterring some physicians from self-referring and sending a contradictory ­public health message (Beltsky JD et al, NEJM 2019;381(9):796–798).
Addiction Treatment
KEYWORDS abstinence addiction-treatment alcohol-use-disorder legal-issues opioid-use-disorder special populations