Home » How to Choose an Antipsychotic in Schizophrenia

How to Choose an Antipsychotic in Schizophrenia

It’s been over a decade since the CATIE trial changed the way we look at antipsychotic drugs. Since then, the number of second-generation antipsychotics has about doubled, and the number of clinical trials has risen even more. Antipsychotics are not all the same, though, and when it comes to schizophrenia, a few stand out in ways that can help you fine-tune your selection. In this article, we’ll look back at the past decade and highlight findings that could change clinical practice, while drawing from some new meta-analyses.

The CATIE trial
CATIE (Clinical Antipsychotic Trials of Intervention Effectiveness) was a double-blind, NIMH-sponsored study. It involved almost 1500 patients with chronic schizophrenia studied under “real-world” conditions. Patients were initially randomized to receive olanzapine, quetiapine, risperidone, or ziprasidone. Later stages included open-label clozapine. The goal was to measure the effectiveness of second-generation antipsychotics vs each other and against a first-generation antipsychotic, perphenazine.

When the dust settled, olanzapine came out on top, at least when patients voted with their feet. Patients stayed on olanzapine longer than any other antipsychotic, suggesting its benefits outweighed its side effects. Those side effects were significant, though, as olanzapine had the highest rate of weight gain and metabolic problems. In the later stages of the study, clozapine was the champ—patients stayed on it twice as long as on olanzapine. Perhaps the most stunning finding was that despite all their fanfare, second-generation antipsychotics were no more efficacious or better tolerated than perphenazine (Lieberman JA and Stroup TS, Am J Psychiatry 2011;168(8):770–775).

New findings
Although the CATIE trial suggests olanzapine should be the first choice for schizophrenia, it’s often reserved as a second-line option because of its metabolic risks. Where, then, to start? The Harvard South Shore Psychopharmacology Algorithm Project (www.psychopharm.mobi) combines real-world scenarios with randomized controlled trials to help answer these kinds of questions. Medications in the project’s flowcharts are chosen for their balance of efficacy, side effects, and cost. The project lists first-line treatments for schizophrenia as aripiprazole, risperidone, or ziprasidone. If cost is not an issue, cariprazine could be added to this list, since there is some evidence it improves negative symptoms. Second-line options include an alternate second-generation antipsychotic, risperidone if not already tried, olanzapine, or a first-generation antipsychotic. Clozapine is reserved for treatment-resistant cases, defined as failure to respond to 2 or more antipsychotics (Osser DN et al, Harv Rev Psychiatry 2013;21(1):18–40).

Overall, the choice of a first antipsychotic is often based on side effects instead of efficacy. The table below may help guide your decision making.

Table: Side Effects of Atypical Antipsychotics 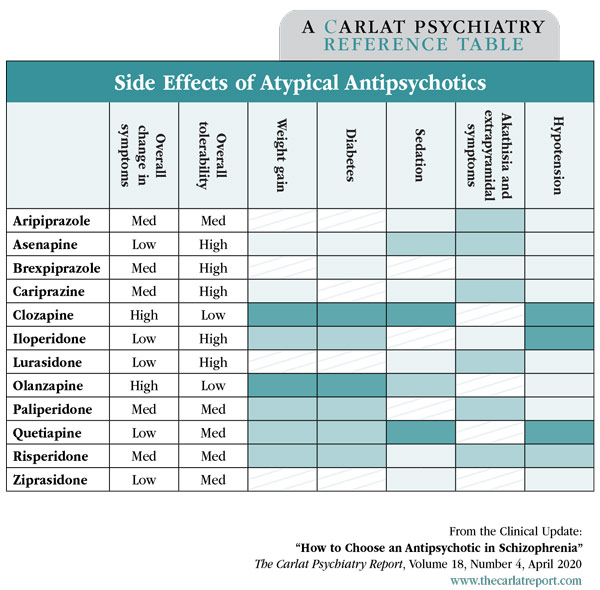 Treatment-resistant schizophrenia
Clozapine is still the gold standard in treatment-resistant cases, but it needs to be started early. The likelihood of responding to clozapine drops by 8%–11% with every failed antipsychotic trial, and the chance of clozapine working goes down from 82% to 32% if it is started longer than 3 years after a first episode (John AP et al, Can J Psychiatry 2018;63(8):526–531; Yoshimura B et al, Psych Res 2017;250:65–70). Clozapine should be considered after failure of 2 antipsychotic trials, with failure meaning a lack of response—in contrast, treatment resistance in mood disorders is defined by lack of recovery. We don’t expect full recovery right now in schizophrenia, though about 1 in 8 patients do come close and regain their functioning (Charlson FJ et al, Schizophr Bull 2018;44(6):1195–1203).

The US trails other nations in clozapine utilization, likely because of its risks. It’s hard to feel good about starting a medication that can cause neutropenia, seizures, cardiotoxicity, and small bowel obstruction. Those risks must be balanced with the surprising fact that patients who take clozapine actually live longer than those taking other antipsychotics. In a meta-analysis of 24 studies covering over 200,000 life years, the mortality rate was 44% lower with clozapine than other antipsychotics, and that protective benefit disappeared soon after clozapine was discontinued (Vermeulen JM et al, Schizophr Bull 2019;45(2):315–329). A useful guide to managing clozapine’s side effects is Jonathan Meyers’ The Clozapine Handbook (2019).

TCPR Verdict: It could be argued that all of the second-generation antipsychotics outside of clozapine are equal, but we’ll venture a recommendation. Start with aripiprazole or, if cost is not an issue, cariprazine. These stand out for their mild benefits in negative symptoms and favorable long-term side effect profiles. Olanzapine is a good second-line choice when efficacy is more of a consideration. After failure of 2 trials, move quickly to clozapine. See the “Antipsychotic Selection in Schizophrenia” table at left for more. 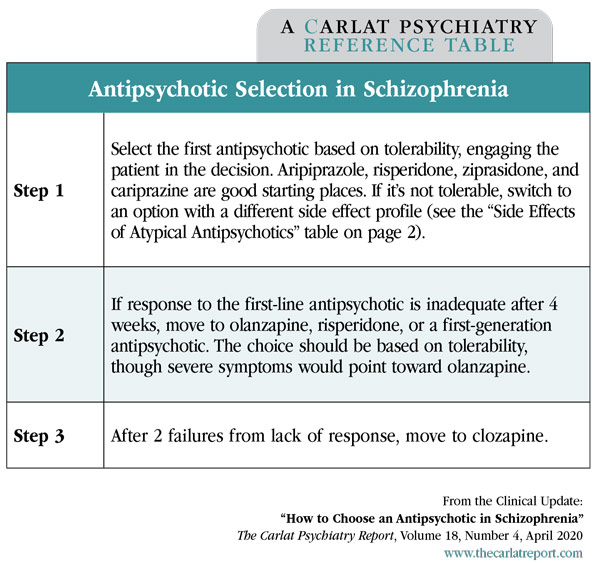 How to Treat and Assess Delirium in Older Patients