General Editor of the Psychopharmacology Algorithm Project at the Harvard South Shore Psychiatry Residency Training Program and Associate Professor of Psychiatry at Harvard University. Dr. Osser has disclosed that he has no relevant financial or other interests in any commercial companies pertaining to this educational activity.

TCPR: What would be the biggest change in practice if psychiatrists followed your algorithms?
Dr. Osser: One area is bipolar depression. This is a disorder where there is an exceptionally large deviation between what the evidence says and what people are doing, especially when it comes to antidepressants. They are still being used rampantly, even in patients with rapid cycling and mixed features, where there is virtually unanimous consensus among the experts that antidepressants should be avoided. For example, if you are a rapid cycler and you get put on an antidepressant, you have triple the chance of going into another depression than if you are not started on an antidepressant (El-Mallakh RS et al, J Affect Disord 2015;184:318–321).

TCPR: Why do we keep using antidepressants in bipolar depression?
Dr. Osser: That’s a mystery. It seems people aren’t aware of this evidence, or they feel that their clinical experience is more impressive, or maybe antidepressants are just easier to prescribe than the medications that are FDA approved in bipolar depression (see the “First-Line Medications for Bipolar Depression” table on page 4). In my own practice, I see case after case of people who are doing poorly with rapid-cycling depressions yet are on multiple antidepressants. It may feel counterintuitive to avoid antidepressants when the patient keeps cycling into depression, but rapid cycling includes those who only cycle into depression, as long as they have bipolar disorder and 4 or more distinct mood episodes in a year.

TCPR: How do the algorithms differ from other practice guidelines?
Dr. Osser: One of the problems with guidelines is that they tend to be too general and aren’t as prescriptive as algorithms. Take the APA guidelines. For major depression, they have a whole range of treatments that are considered first line—the tricyclics, the SSRIs, various kinds of psychotherapy, and everything in between. Then they go through the treatments and give a massive literature review for each of them. But in the end, those guidelines never tell you which treatment to choose. We try to name specific medications that offer the best balance of efficacy, safety, and cost for each step.

TCPR: Is there a drawback to your approach?
Dr. Osser: Our algorithms could be misinterpreted as a rigid, black-and-white approach if readers only rely on the summary. The summaries are online so we can update them in real time (www.psychopharm.mobi), but to make good use of them you need to read the full description of the reasoning that is in the published papers. Those descriptions have all the nuances that allow you to tailor the treatment for the individual patient, as well as the evidence behind each decision.

TCPR: Let’s get into that evidence. For major depression, you list three first-line options: bupropion, escitalopram, and sertraline. Why these?
Dr. Osser: There have been a few meta-analyses comparing the antidepressants. We drew from those as well as other interesting data like the CO-MED study, which compared escitalopram head-to-head with esteemed combinations like SSRI+bupropion and SSRI+mirtazapine. In that study, escitalopram did very well; it was equal to those combinations even when used alone. We also gave a lot of weight to side effects. Many patients don’t want sexual side effects, in which case bupropion is the best first-line choice (Giakoumatos CI and Osser DN, Harv Rev Psychiatry 2019;27(1):33–52).

TCPR: The list gets longer once we’re past the first-line options for depression,1 and you suggest that patient preference should guide the selection of a second-line treatment. How would you talk to patients about their options?
Dr. Osser: I’d start by dividing the options into augmentation and switch strategies. We’ve listed five switches and five augmenters as second-line options. We were hoping a few would stand out, but there wasn’t a meaningful difference in the numbers needed to treat (NNT), which were in the 5–10 range. Patients usually know whether they’d prefer to switch or augment, and they tend to be right. The ones who’ve improved on the initial drug prefer to augment. Once you clarify a patient’s preference, you can refine the choice based on whether the patient prefers a natural supplement, a prescription medication, or repetitive transcranial magnetic stimulation (rTMS). Side effects also play a key role. The second-generation antipsychotics may have more studies than other options, but they don’t have an impressive NNT—it’s around 8. But if a patient wants one of those and will put up with the side effects, I’d go with it. By the way, psychotherapy is a legitimate option at each of these steps, but these are psychopharmacology algorithms, so they do not review the evidence on that. 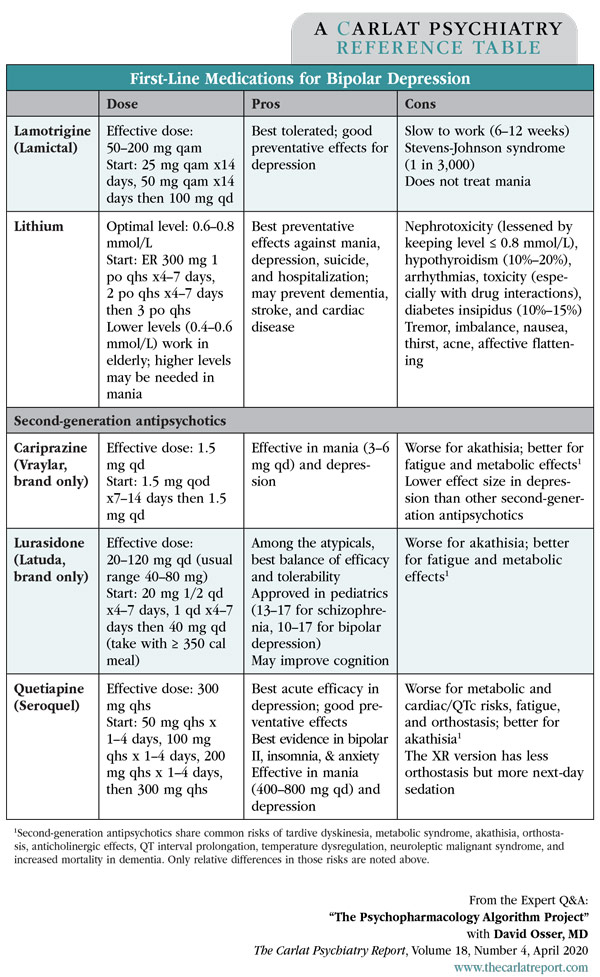 TCPR: Your algorithms for bipolar and unipolar depression both place electroconvulsive therapy at the top when there is an urgent need for recovery or when the depression fails to resolve after 2 medication trials. You give less weight to rTMS, which only shows up as an option after failure of 1 antidepressant in unipolar depression.
Dr. Osser: Yes. The FDA approved rTMS after failure of 1 antidepressant trial, but not after the patient fails 2 antidepressants, and there’s a good reason for that. In the data submitted to the FDA, rTMS was not significantly more effective than sham after 2 or more failed trials (Giakoumatos CI and Osser DN, Harv Rev Psychiatry 2019;27(1):33–52). A lot of practitioners believe rTMS is more effective than medication for treatment-resistant cases, but this is an area where clinical experience doesn’t match with the evidence.

TCPR: Why the mismatch?
Dr. Osser: One reason might be that there’s a large placebo effect with new technologies like rTMS. In addition, the patient comes in for treatment 5 days a week, which will further boost the placebo effect. The placebo effect of sham rTMS has caused some studies to fail, and in everyday practice, that effect can color our experience. We can also be fooled by the natural course of illness. We see that in bipolar depression, where the episodes usually last 2–3 months. So let’s say it takes a month for the patient to come see us. Then we start an antidepressant and the patient gets better in 1–2 months. That patient probably would have gotten better without the medication, but we might attribute the recovery to the antidepressant.

TCPR: The algorithms don’t seem to give special preference to FDA-approved ­medications or limit their reviews to randomized controlled trials (RCTs). Otherwise the second-generation antipsychotics would have risen to the top of the list for treatment-resistant depression.
Dr. Osser: That’s right. Treatments that are FDA approved or backed by a dozen RCTs don’t always have the biggest effect size or the most favorable side effect profile. There are also limitations to RCTs. They are usually short term, and they tend to include a select population that may not represent the patients we’re actually seeing in our office. Sometimes they use designs that inflate the results, like with enriched samples. That’s why we also emphasize real-world observational studies in the algorithms, which can lead to conclusions that are different from those of the industry-sponsored RCTs.

TCPR: What’s an example where the observational data lead you in a different direction?
Dr. Osser: Schizophrenia is one. When the industry-sponsored trials are meta-analyzed, they find very little difference in the efficacy of the antipsychotics, except for clozapine. However, when you look at real-world studies that randomized anyone who was hospitalized with acute schizophrenia to open-label treatment with different antipsychotics, you see a difference. In those studies, the more effective treatments tend to be olanzapine, risperidone, and the first-generation antipsychotics like haloperidol and perphenazine. In contrast, quetiapine, ziprasidone, and aripiprazole tend to be significantly less effective at getting the patient out of the hospital in the shortest possible time (Osser DN et al, Harv Rev Psychiatry 2013;21(1):18–40).

TCPR: Back to bipolar disorder. You recommend two first-line medications for the manic side: lithium for classic, euphoric mania; and quetiapine for dysphoric mania and mixed states. Tell us why.
Dr. Osser: We started out with the idea that we should have two lines of treatment for mania: one for severe mania and one for mild to moderate mania. For severe cases, we were going to suggest haloperidol, which has the largest effect size in mania. But our expert reviewers presented convincing evidence that the major treatment difference is whether the patient has mixed mania or classic, euphoric mania. For mixed mania, lithium is not as effective as second-generation antipsychotics and mood-stabilizing anticonvulsants, particularly valproate (Depakote). Lithium is ranked third after those two. The second-generation antipsychotics are also effective in mixed mania, and we settled on quetiapine because it had the best evidence for both mania and depression. The big risk with mania is that patients are going to switch into depression, and depressions make up over 75% of the time that bipolar patients suffer a mood episode. Other second-gens do have slightly greater efficacy than quetiapine in mania, such as risperidone and olanzapine, but we stayed with quetiapine because we want to prevent those subsequent depressions. As for haloperidol, we actually ended up dropping it altogether from the algorithm. It may be very effective for mania, but it also has the greatest risk of precipitating a post-manic depression (Mohammad O and Osser DN, Harv Rev Psychiatry 2014;22(5):274–294).

TCPR: Cariprazine (Vraylar) recently joined quetiapine as the second atypical antipsychotic to gain FDA approval in both mania and depression. Where does it fit?
Dr. Osser: It’s the new kid on the block. Lurasidone (Latuda) and olanzapine-fluoxetine combination (Symbyax) are the other two with FDA approval in bipolar depression, but neither of them have any studies in mania. Cariprazine does have some advantages over quetiapine, like fewer metabolic side effects and less sedation. We are waiting for more studies on it to see where it fits in the algorithm, but currently it has at least one drawback (besides cost): Its efficacy was about half of the other options in a meta-analysis. Specifically, it had an NNT of 10 for response in bipolar depression, compared to 6 for quetiapine, 5 for lurasidone, and 4 for olanzapine-fluoxetine combination (Citrome L, Int J Clin Pract 2019;73(10):e13397; Wang D and Osser DN, Bipolar Disord 2019. doi:10.1111/bdi.12860). That’s a concerning signal, but those numbers might be explained by quirks in the studies, and we go into those subtleties more in the full description of the algorithm.

TCPR: Olanzapine-fluoxetine combination consistently rises to the top for efficacy in bipolar depression, and some experts recommend it first-line there. What made it sink to the bottom in your bipolar depression algorithm?
Dr. Osser: That one’s simple. We give strong consideration to the harms, especially the long-term harms, and olanzapine’s metabolic side effects are pretty dire. Those are not acceptable risks for a first-line treatment.

TCPR: Thank you for your time, Dr. Osser.

Editor’s note: A summary of the 10 psychopharmacology algorithms is available at www.psychopharm.mobi, and a book with their full descriptions is slated for publication in 2020 (Wolters Kluwer).

Topics in the Diagnosis and Treatment of PTSD