Home » Who Should Get Lithium?

Who Should Get Lithium? Janusz Rybakowski is a pioneer in lithium research who has authored over 500 articles on clinical psychiatry. He is a professor of psychiatry at Poznan University in Poland, former chairman of psychiatry at the Medical Academy Bydgoszcz, and author of an upcoming textbook on lithium. Dr. Rybakowski has disclosed that he has no relevant financial or other interests in any commercial companies pertaining to this educational activity.

TCPR: Lithium has been called the gold-standard treatment in bipolar disorder. Why is it not used more often?
Dr. Rybakowski: That is a paradox. On the one hand, lithium is accepted as a first-line treatment for bipolar disorder, but it is also greatly underutilized. And I think there are two main reasons. One is aggressive promotion of branded mood stabilizers, first with anticonvulsants and later with atypical antipsychotics. Lithium, in contrast, is an orphan drug and has never been promoted in any measure. The second reason is that there is a perception of lithium as a toxic drug. This dates back to the time of its discovery in the 1940s by John Cade. Back then lithium was being used as a dietary salt substitute and there were some cases of fatal overdose on it.

TCPR: What are lithium’s main advantages in mood disorders?
Dr. Rybakowski: About one-third of bipolar patients are excellent lithium responders. If these patients take lithium, the illness practically ceases if they stay on it. That’s what we found in a 10-year study of 109 bipolar patients on long-term lithium; 27%–35% had no further episodes after starting it (Rybakowski JK et al, Bipolar Disord 2001;3(2):63–67).

TCPR: How do you tell which bipolar patients will respond to lithium?
Dr. Rybakowski: They resemble the classic picture of manic-depressive illness put forth by Emil Kraepelin. The textbook case: very good remission between episodes, little or no concomitant psychiatric morbidity, and no substance use (see table at right). Our group also found that the hyperthymic temperament predicts a favorable response (Rybakowski JK et al, J Affect Disord 2013;145(2):187–189). 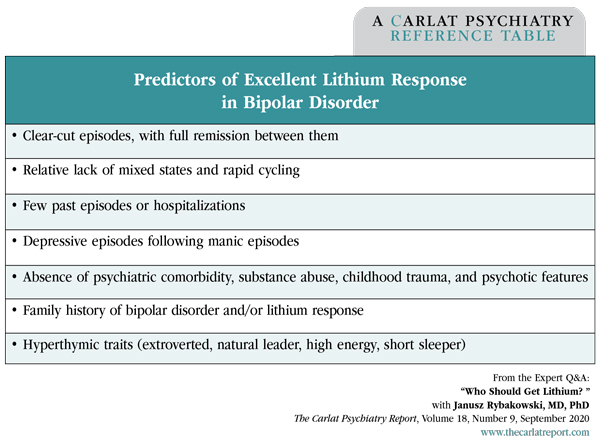 TCPR: Can you describe the hyperthymic temperament?
Dr. Rybakowski: These are people with long-standing hypomanic traits. They are natural leaders, extroverted, high energy, and action oriented. Here are some of the hyperthymic items from the Temperament Evaluation of Memphis, Pisa, Paris and San Diego (TEMPS-A) Scale:


Hyperthymic is one of the five affective temperaments that are associated with mood disorders. These were first described by Emil Kraepelin, who observed them both in patients and their relatives. The others are depressive (dysthymic), cyclothymic, anxious, and irritable. The cyclothymic, anxious, and irritable temperaments predict a poorer response to lithium, as do neurotic personality traits. We also found that cognitive disorganization predicted a poor response to lithium (Dembinska-Krajewska D et al, Pharmacother Psychiatry Neurol 2012;28:153–158).

TCPR: Does lithium work better if it’s started early in the illness, like in the teenage years?
Dr. Rybakowski: Definitely. There are at least two studies showing that starting lithium early in the course of illness leads to a better prophylactic effect (Franchini L et al, Eur Arch Psychiatry Clin Neurosci 1999;249(5):227–230; Kessing LV et al, Br J Psychiatry 2014;205(3):214–220). This is not easy, though. It’s difficult for a young person to understand the need for long-term treatment with lithium after their first episode of mania. But those are the kinds of patients who can stay well for life if they start it early. When more episodes pile on, it becomes more difficult to keep the illness away.

TCPR: You said that 30% of bipolar patients are excellent lithium responders. What is lithium’s role in the other 70%?
Dr. Rybakowski: Lithium is still very effective at preventing recurrences and could be used alongside other mood stabilizers. It also has an important role in non-bipolar depression as antidepressant augmentation. Finally, lithium should be considered for any patient with a high suicide risk—whether unipolar or bipolar—because it is one of only two psychiatric medications with well-established preventative effects against suicide, both attempted and completed. The other is clozapine in schizophrenia.

TCPR: Are lithium’s anti-suicide effects related to its mood benefits?
Dr. Rybakowski: No. Interestingly, lithium’s anti-suicide effects do not correlate with its ability to prevent mood recurrences, which suggests it may have a specific effect on suicidality itself. Lithium discontinuation increases this risk of suicide, and if the medicine is discontinued too often, the patient may not respond to it again. These effects are worse if lithium is stopped rapidly, like over less than a month. So education is very important here, and psychoeducation groups have evidence to improve adherence in bipolar disorder (Rybakowski JK, Drug Dev Res 2020;10.1002/ddr.21660).

TCPR: Would you be worried that a suicidal patient might overdose on lithium?
Dr. Rybakowski: Not very much. I have never encountered a case of intentional lithium overdose. We are not going to significantly limit the means to overdose by withholding lithium, and lithium may be the only medication that will reduce the risk of overdose in such a patient.

TCPR: Another reason people might avoid lithium is side effects and toxicity, correct?
Dr. Rybakowski: Yes. Lithium is often seen as toxic to the kidneys, thyroid, and cognitive functioning, but I think these fears are overstated. Lithium may actually prevent cognitive decline in bipolar disorder. It has more ­neuroprotective effects than any other psychiatric medication and is known to prevent dementia. Compared to most other mood stabilizers, lithium does not cause as many cognitive side effects (Rybakowski JK, Curr Alzheimer Res 2016;13(8):887–893).

TCPR: How do you manage nausea and tremor on lithium?
Dr. Rybakowski: Nausea usually happens in the first few weeks, but you have to manage it because nausea is the kind of side effect that will make patients stop their lithium. It helps to lower the dose, raise it slowly, and use a slow-release preparation. Also, taking the lithium just after a meal or with a glass of milk will reduce the nausea. Tremor is usually responsive to propranolol.

TCPR: What about renal toxicity?
Dr. Rybakowski: The risk of end-stage renal disease appears lower in recent studies, which are more methodologically sound than the older ones in the 1960s and 1970s (Nielsen RE et al, Pharmacopsychiatry 2018;51(5):200–205). The most common renal effect of lithium is decreased concentration ability, which shows up as polydipsia (excess drinking) and polyuria (excess urination). This tends to start within the first few weeks of lithium therapy and improves with lowering the dose. In severe cases it can present as full diabetes insipidus, which needs to be treated and may require the lithium to be stopped. The bigger problem is lithium-induced nephropathy, which can develop after decades of lithium use.

TCPR: How do you monitor for nephropathy?
Dr. Rybakowski: We check the GFR, and I would be very concerned if it falls below 60 mL/min/1.73 m2. At that point you’d want to consult with a nephrologist, but the problem there is they often just tell you to stop the lithium, which may not be feasible in a lithium responder whose bipolar illness may worsen significantly if the lithium is replaced. So what I do is lower the lithium, such as cutting the dose in half, and check the GFR more frequently in consultation with the nephrologist. For example, I have several patients with a GFR in the 40–50 range. I followed them for 5 years, and there was no decrease in their GFR.

TCPR: Is there anything we can do to prevent nephropathy on lithium?
Dr. Rybakowski: The main thing is to avoid high levels. Every toxic level raises the risk, and there’s some evidence that if the level is kept at 0.8 or below, the kidneys may be spared. That is what I would recommend for long-term prophylaxis with lithium; somewhere between 0.5 and 0.8 is fine for most patients. You may need to go higher for acute mania, like to 1.0 or slightly above that, but for prophylaxis you will prevent a lot of side effects, including renal toxicity, in the lower range. After age 65, you should aim for an even lower prophylactic level. This will depend on the patient but is usually about 30% lower.

TCPR: How significant are the thyroid risks with lithium?
Dr. Rybakowski: About 1 in 40 patients develop hypothyroidism on lithium for each year of treatment, but that figure doesn’t tell us how much of the problem is due to lithium. Thyroid abnormalities are more common in bipolar disorder, and bipolar illness itself can predispose a patient to hypothyroidism. Last year we published a study comparing thyroid variables in 98 bipolar patients on long-term lithium—up to 47 years—with 39 bipolar patients who had never been on lithium. The lithium group was more likely to have higher concentrations of TSH and free T4, and lower concentrations of free T3, as well as goiter. But the actual rate of clinical hypothyroidism was the same in both groups (Kraszewska A et al, Hum Psychopharmacol 2019;34(4):e2708). When hypothyroidism does occur on lithium, it is readily treatable with levothyroxine.

TCPR: At what level of TSH would you start levothyroxine?
Dr. Rybakowski: Generally, around 5–6 mU/L, and you would treat to get the TSH into the normal range.

TCPR: You mentioned that thyroid problems are more common in bipolar disorder. Do they play a causative role in the illness?
Dr. Rybakowski: Definitely not. There were some hypothesis linking bipolar illness with high level of antithyroid antibodies, but it was not true.

TCPR: What other medical problems do you see more often in bipolar patients?
Dr. Rybakowski: They have higher rates of heart disease, stroke, cancer, and metabolic problems like diabetes and hypertension. Notably, those illnesses are associated with worse outcomes with COVID-19, and lithium has well-documented antiviral properties.

TCPR: Has lithium shown efficacy against the coronavirus?
Dr. Rybakowski: No, it has not been tested against SARS-CoV-2, which is the virus responsible for COVID-19. But it has demonstrated antiviral effects against over a dozen DNA and RNA viruses, including several in the coronavirus family. Lithium has immune-modulating effects, but it also has direct antiviral effects, inhibiting replication, cell entry, and apoptosis. The best evidence is in the herpes group of viruses, including HSV-1 and HSV-2, which is relevant because patients with bipolar disorder who are seropositive for HSV-1 have worse cognitive outcomes (Dickerson FB et al, Biol Psychiatry 2004;55(6):588–593). In terms of COVID-19, lithium is not ready for clinical use because we don’t know if it works against COVID-19 and it has risks of its own, but it might be considered in patients with bipolar disorder who have COVID-19 (Murru A et al, Int J Bipolar Disord 2020;8(1):21).

SUBSCRIBE NOW
Table Of Contents
CME Post-Test - When to Use Lithium, TCPR, September 2020
Highlights From This Issue
How COVID-19 Affects the Brain
Who Should Get Lithium?
Modern Challenges of Delusional Disorder
Two Augmentation Strategies Compared in Bipolar I
Confidentiality in a Time of COVID
DOWNLOAD NOW
Featured Book
Featured Video
Featured Podcast
Recommended