Joseph Pierre, MD.
From The Carlat Psychiatry Report
Issue Links: Learning Objectives | Editorial Information | PDF of Issue
Joseph Pierre, MD. Chief, Hospital Psychiatry Division at the VA West Los Angeles Healthcare Center. Clinical Professor in the Department of Psychiatry and Biobehavioral Sciences at UCLA. Dr. Pierre has disclosed that he has no relevant financial or other interests in any commercial companies pertaining to this educational activity.

While positive symptoms like hallucinations and delusions are among the more treatment-responsive symptoms of schizophrenia, the treatment of delusional disorder often proves much more vexing.

Delusional disorder is often a diagnosis of exclusion requiring that you rule out other causes like schizophrenia, primary mood disorder, or substance-induced psychosis. The DSM criteria for delusional disorder have changed over time, with DSM-5 no longer specifying the need for “non-bizarre” delusions. The distinction between “bizarre” and “non-bizarre” delusions was removed due to poor inter-rater reliability (Bell V et al, Schizophr Res 2006;86(1–3):76–79).

The DSM-5 criteria for delusional disorder specify that “apart from the impact of the delusion(s) or its ramifications, functioning is not markedly impaired.” However, the functional impairment resulting from a patient’s delusions can be profound. Still, the criteria reflect the fact that those with delusional disorder, unlike many suffering from schizophrenia, are typically able to hold down jobs and can participate in family life. Often people with delusional disorder avoid psychiatrists, instead bringing their complaints to the legal system, non-psychiatric medical providers, spouses, or the internet.

The internet presents another challenge in assessing delusions. Delusions aren’t typically considered to be shared beliefs, but in the internet era, people with conspiracy theories as well as full-blown delusions can find like-minded supporters online in a way that previously did not exist (Pierre JM, J Am Acad Psychiatry Law 2019;47(2):171–179).

For example, delusions of persecution can be easily validated on the internet as examples of widespread “gangstalking” (Sheridan LP et al, J Forens Psychiatr Psychol 2015;26(5):601–623). People with delusions of infestation can find a non-psychiatric explanation for their experiences in the form of “Morgellons disease,” a controversial syndrome consisting of fibrous skin sores and the sensation of bugs inside the skin (Hylwa SA et al, Clin Dermatol 2018;36(6):714–718; more on Morgellons is in our 9/16/2020 podcast). Although those with delusional disorder find such online support helpful, it often prevents them from receiving the potential benefits of psychiatric care.

Clinical diversity
Delusions tend to center around stereotyped themes of paranoia, grandiosity, somatic experiences, jealousy, and erotomania. In this sense, they often seem to represent hypertrophied traits and anxieties that we all can recognize in ourselves to some degree. Examples include a married man who accuses his wife of cheating and follows her around with a camera to collect “evidence” of her infidelity; a group of men and women who meet in a support group for “targeted individuals” to discuss how to cope with surveillance and harassment by the government; or a father who, after a stroke, is convinced that his family has been replaced by imposters.

Given the diversity of experiences that fall under the definition of a delusion, including the various “misidentification syndromes” (eg, Capgras, Fregoli, and Cotard syndromes; xenomelia; etc), it should come as no surprise that an overarching pathophysiology of delusions remains beyond our grasp. However, there is evidence that some cognitive biases are associated with delusional thinking more generally. One of the most replicated findings is that those with delusional beliefs tend to have a “jumping to conclusions” cognitive style, making decisions based on comparatively little evidence (Dudley R et al, Schiz Bull 2016;42(3):652–665). This finding helps to explain why people with delusions often make hasty conclusions based on first impressions and singular subjective experiences. In clinical practice, this often stymies clinicians’ abilities to rationally discuss other potential explanations of patients’ life events, including somatic experiences attributed to medication side effects.

Treatment alliance
Psychiatric treatment generally goes better when it’s built around a therapeutic alliance, and nowhere is that more true than in delusional disorder. Getting patients “in the door” and keeping them engaged requires empathic listening to their idiosyncratic accounts of their experiences and sources of distress. When patients inevitably ask whether you believe their delusions, it is best to emphasize that you understand their suffering is real and not just evidence that they’re “crazy.” This creates an opportunity to address symptoms like anxiety and insomnia now. Later, as the relationship builds, you can examine and challenge the evidence for their beliefs together.

Patients rarely disavow their delusions, even in recovery. More often they’ll say things like, “I just don’t think about it much anymore,” or, “I was infected with parasites, but they’re mostly gone now.” Focusing less on the delusional content and more on functional outcomes like work and relationships is key to successful long-term collaboration.

Pharmacotherapy
Antipsychotics are the default treatment for delusions, but the evidence for their use here is shakier than you might think. While patients with delusional disorder are occasionally included in antipsychotic clinical trials, there has never been a randomized controlled trial (RCT) of any pharmacologic intervention ­exclusively for the treatment of patients with delusional disorder.

What we do have in lieu of RCTs are case reports, uncontrolled observations, and non-randomized trials, and even here the results are often modest. Overall, only about a third of patients with delusional disorder have significant improvement on antipsychotics (ie, > 50% reduction in symptoms) (Munoz-Negro J et al, J Clin Psychopharmacol 2016;36(6):684–690). 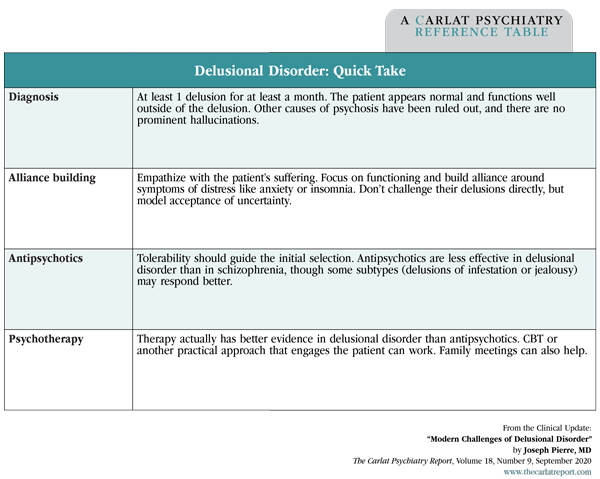 Outcomes with first-generation antipsychotics are slightly better than second-generation atypicals, but it’s hard to draw conclusions without head-to-head RCTs. Their apparent superiority may be due to the specific benefits of pimozide in delusional parasitosis, which might be explained by its ability to decrease cutaneous sensations via opioid and antihistaminergic antagonisms. However, given the potential for extrapyramidal side effects and QTc prolongation, pimozide is no longer considered a first-line medication for delusional disorder, even for delusional infestation (Moriarty N et al, Am J Med 2019;132(12):1401–1409). Among the atypicals, risperidone and ­olanzapine are often recommended first-line because they have the most research supporting them, but that recommendation ignores tolerability issues—particularly metabolic—that may guide you toward other atypicals.

There are at least three reasons why antipsychotics may not work as well in delusional disorder as they do in schizophrenia (Peralta V et al, Psychol Med 2016;46(13):2829–2839):


Psychotherapy
When it comes to evidence in delusional disorder, psychotherapy actually has a leg up on medication. In the only RCT done in delusional disorder to date, cognitive behavioral therapy (CBT) improved conviction, preoccupation, insight, affect, and other dimensions of delusional belief as compared to supportive sessions within a small sample of those already taking antipsychotic medications (O’Connor K et al, Can J Psychiatry 2007;52(3):182–190). However, for delusions across various psychotic disorders (eg, not only in delusional disorder), a meta-analysis found that the benefits of CBT were short lived and were not superior to other forms of psychotherapy (Mehl S et al, Front Psychol 2015;6:1450).

TCPR Verdict: Combined psychotherapy and antipsychotic medication is the ideal approach in delusional disorder. Change is difficult and adherence is low in this population. Focus on a therapeutic alliance around the patient’s goals. Start with an atypical antipsychotic that is tolerable enough for the patient to stick with and can help address the symptoms like anxiety and insomnia. Antipsychotics may not work as well in delusional disorder as they do in schizophrenia, and they are not necessary if they are not helping.

SUBSCRIBE NOW
Table Of Contents
CME Post-Test - When to Use Lithium, TCPR, September 2020
Highlights From This Issue
How COVID-19 Affects the Brain
Who Should Get Lithium?
Modern Challenges of Delusional Disorder
Two Augmentation Strategies Compared in Bipolar I
Confidentiality in a Time of COVID
DOWNLOAD NOW
Featured Book
Featured Video
Featured Podcast
Recommended