Home » Buspirone: Still Effective After All These Years?

Buspirone: Still Effective After All These Years?

Eugene Rubin, MD.
From The Carlat Psychiatry Report
Issue Links: Learning Objectives | Editorial Information | PDF of Issue
Eugene Rubin, MD. Psychiatrist in private practice, Bingham Farms, MI. Dr. Rubin has disclosed that he has no relevant financial or other interests in any commercial companies pertaining to this educational activity.

When buspirone was released in 1986, it was advertised as providing “a different kind of calm.” Unfortunately, physicians and their patients weren’t ready to accept the kind of calm that required several weeks to take effect, when punchier, quicker benzos were the standard route to tranquility. Although buspirone is FDA approved for generalized anxiety disorder (GAD), some question whether it treats anxiety at all. In this article, we will look at how buspirone works and what it can and can’t do for our patients.

How buspirone works
Buspirone, an azapirone, is in a class of its own. It was a failed antipsychotic before it was shown to be effective for GAD. Its primary mechanism of action is 5HT1A partial agonism, which is a component of the mechanism in the antidepressant vilazodone and a few antipsychotics (aripiprazole, brexpiprazole, cariprazine, clozapine, and quetiapine). Buspirone’s other mechanisms, which include mild D2 antagonism and noradrenergic effects, are less understood.

What it can and can’t do
Buspirone clearly works in GAD, but does it work as well as other treatments? In a meta-analysis of studies in patients with GAD, its effect size was smaller (0.17) than that of other GAD meds, such as SSRIs (0.36) and benzodiazepines (0.38) (Hidalgo RB et al, J Psychopharmacol 2007;21(8):864–872). On the other hand, buspirone has held up well in head-to-head comparisons with multiple benzodiazepines, and patients do just as well when switched from benzodiazepines to buspirone (Delle Chiaie R et al, J Clin Psychopharmacol 1995;15(1):12–19). Its other advantages include lack of dependence, tolerance, withdrawal, and abuse potential. It does not impair cognition or increase the risk of falls.

Buspirone is popular as an augmentation strategy in major depression, although the evidence for its role there is tenuous. It ranked below lithium, the atypical antipsychotics, and thyroid augmentation in a meta-analysis, and bupropion outperformed it in the augmentation phase of the STAR*D trial. To its favor, buspirone did work better in severe depression in a large randomized augmentation trial, and it may be worth trying when tolerability is the priority (Zhou X et al, J Clin Psychiatry 2015;76(4):e487–e498; Appelberg BG et al, J Clin Psychiatry 2001;62(6):448–452). Buspirone may also relieve two common side effects of SSRIs: sexual dysfunction and bruxism (Garrett AR and Hawley JS, Neurol Clin Pract 2018;8(2):135–141).

Buspirone does not treat depression on its own, but an intriguing pilot study suggests it may work as an antidepressant when combined with melatonin. The trial was inspired by animal research, where low-dose buspirone had neuroprotective effects when combined with melatonin, but not on its own. In the multicenter placebo-controlled trial of 132 patients with acute major depression that followed, buspirone 15 mg + melatonin sustained-release 3 mg qhs, but not buspirone alone, improved depression and cognition with a moderate effect size (0.43) (Fava M et al, J Psychiatr Res 2012;46(12):1553–1563).

Buspirone may relieve physical and psychological symptoms of premenstrual dysphoric disorder, according to small controlled trials that either dosed it continuously or in the 2 weeks before menses (10–30 mg/day) (Nazari H et al, Arch Gynecol Obstet 2013;287(3):469–472). It may also have anti-aggressive effects in various populations, including dementia, traumatic brain injury (TBI), mental retardation, and children with ADHD or oppositional defiant disorder (Cantillon M et al, Am J Geriatr Psychiatry 1996; 4(3):263–267). Jonathan Silver, MD, editor of the APA textbook on TBI, uses buspirone first-line for irritability and aggression in TBI at doses up to 30 mg bid (See TCPR, Aug 2020).

Buspirone failed as an antipsychotic, but the doses used in those studies (up to 1,200 mg/day) confirmed its safety, and open-label studies suggest high doses (up to 180 mg/day) improve tardive dyskinesia (Moss LE et al, J Clin Psychopharmacol 1993;13(3):204–209). Buspirone has been extensively tested in alcoholism, where the best that can be said is that it helped subjects’ anxiety but not their addiction. Studies in cocaine and nicotine dependence were also negative. Buspirone does not work in social anxiety or panic disorder, and studies in OCD are inconclusive.

When and how to use it
Buspirone is a good choice when tolerability is needed, whether for GAD or antidepressant augmentation. More challenging is starting buspirone in patients with a history of benzodiazepine use. There the dosage needs to be primed with psychoeducation, emphasizing its lack of tolerance, withdrawal, and cognitive side effects. Help the patient understand that while they may be giving up the rewarding effect, the antianxiety effects of buspirone will be comparable to benzos in the long term.

I usually start with 5–7.5 mg bid and raise to 15 mg bid over a week. From there, I’ll let it rest 2–4 weeks to determine its efficacy and raise as needed. Buspirone is licensed up to a max of 60 mg/day, and some authors go up to 90 mg/day for anxiety. With its 3-hour half-life, tid dosing is usually recommended, but one study found equal benefit with bid dosing—much more feasible for many patients (Sramek JJ et al, Depression and Anxiety 1999;9(3):131–134).

Buspirone is a substrate of CYP3A4, so you will want to use higher doses in patients on inducers such as carbamazepine and lower doses in patients on inhibitors such as fluvoxamine, nefazodone, or grapefruit juice. Taking it with food can increase its absorption up to 2-fold and reduce nausea. Other side effects to watch for are headache and dizziness. In bipolar disorder, buspirone can rarely induce mania.

TCPR Verdict: When patients need a tolerable medication for GAD that lacks sexual side effects and has no potential for tolerance or abuse, buspirone is first-line. For antidepressant augmentation, buspirone is not clearly effective, but it can be used when tolerability is the main concern.

Table: Buspirone at a Glance 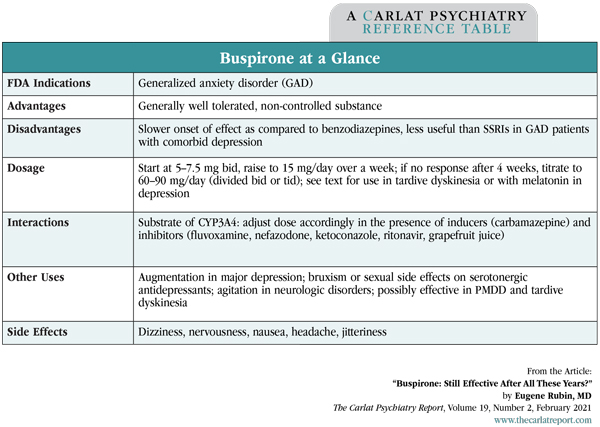 To learn more, listen to our 2/22/21 podcast, “Does Buspirone + Melatonin = An Antidepressant?” Search for “Carlat” on your podcast store.

Locked-In Syndrome and Quality of Life