Antidepressants Harm Some With Bipolar Depression

Antidepressants are controversial in bipolar depression, in part because we don’t have enough well-designed studies to clarify their role. The most rigorous trials have come up negative, and many of the positive ones suffer from design flaws (eg, lack of placebo, small sample size, or enriched design). On the other hand, few of these studies have uncovered significant rates of manic switching, as long as a mood stabilizer is on board. This new study is the first placebo-controlled trial to examine the long-term effects of an SSRI in bipolar disorder.

The study, which is summarized in the table below, randomized 119 patients with bipolar I or II depression to citalopram or placebo as an add-on to a “traditional” mood stabilizer (“traditional” means an antipsychotic was not allowed as the sole mood stabilizer, but lithium, valproate, carbamazepine, and lamotrigine were). Citalopram was started at 10 mg/day and increased by 10 mg every week as needed toward a max of 60 mg/day (mean of 27 mg/day). 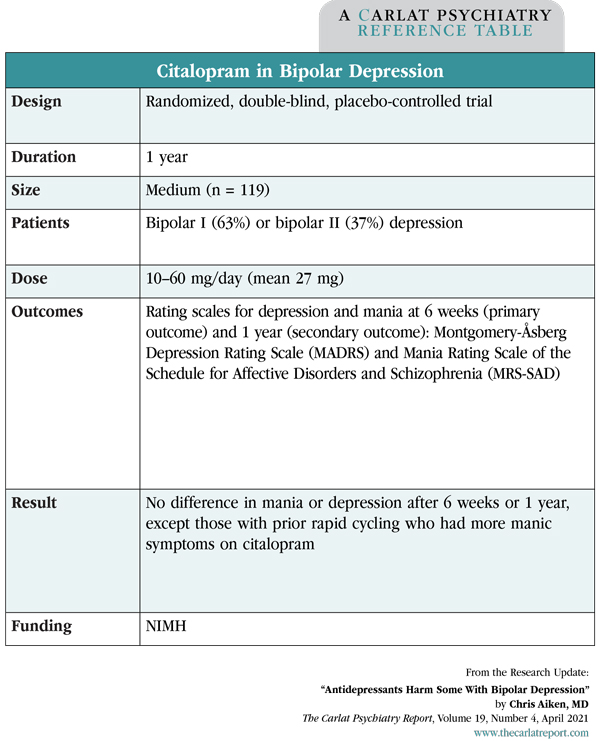 Compared to placebo, citalopram brought no significant differences in response, remission, or change in depressive symptoms after acute (6-week) and long-term (12-month) follow-up. Likewise, there was no difference in manic symptoms or new episodes of hypomania or mania at either time point, and analysis of the month-by-month trend in symptoms also revealed no differences.

The authors then broke the data down by three bipolar subtypes: type I, type II, and rapid cycling. No differences emerged between types I and II, but those who entered the study with a recent history of rapid cycling (n = 33) had significant worsening of manic symptoms (a mean 2-point increase over placebo on the MRS-SAD mania scale).

The main finding—that an antidepressant did not help and may have harmed the rapid cycling group—is supported by earlier studies. The main weakness was the dropout rate, which although high (30% short-term, 69% long-term) was within the range seen in maintenance bipolar trials. Dropouts were handled conservatively with intent-to-treat analysis and were evenly distributed between the two groups. Most were patients who exited the trial because they required further therapeutic intervention for worsening symptoms.

TCPR’s Take
Whether you fall in the pro, con, or uncertain camp on antidepressants in bipolar disorder, this study suggests they are not very helpful and—in line with earlier work—should be avoided in rapid cycling cases. Rapid cycling is difficult to detect and includes patients with no recent manias but at least 4 discrete episodes of depression in the past year. Monitor carefully for rapid cycling with a mood chart in patients with bipolar disorder who take an antidepressant.

To learn more, listen to our 4/19/21 podcast, “Antidepressants in Bipolar: What the Experts Actually Do in Practice.” Search for “Carlat” on your podcast store.