Home » Viibryd Goes Generic, But Is It Worth Prescribing?
CLINICAL UPDATE

Viibryd Goes Generic, But Is It Worth Prescribing?

After 11 years of market exclusivity, vilazodone (Viibryd) lost its patent in June of 2022. The price of this “multimodal” antidepressant has fallen to $40 a month and may fall further as more manufacturers enter the market. More patients can afford to take it, but whether we should prescribe more vilazodone is less clear.

Vilazodone wraps the pharmacodynamic effects of the popular SSRI-buspirone combo into one drug. Like an SSRI, it is a potent serotonin reuptake inhibitor, and like buspirone, it is a 5-HT1A serotonin agonist. Vilazodone’s manufacturer hoped this dual mechanism would lead to faster onset, more anxiolytic effects, and fewer sexual side effects. At first, those hopes seemed to pan out, but today they only hold up if the data are cherry-picked.

Vilazodone’s clinical efficacy rests on four large, short-term randomized controlled trials in major depression. In the first trial, it separated from placebo at one week, and in another it separated at two weeks. However, there was no early response in the remaining two trials, and most antidepressants have some evidence of early efficacy within the first two weeks, so even a generous interpretation here does not suggest that anything special is going on (Chauhan M et al, Neuropsychiatr Dis Treat 2022;18:1175–1193).

Nor do any of the vilazodone trials suggest greater potency than other medications. Its antidepressant effects were similar to those of citalopram 40 mg/day in a large head-to-head trial of 1,133 patients. That study also compared two fixed doses of vilazodone (20 mg and 40 mg) and found no evidence of greater benefits at the higher dose (Mathews M et al, Int Clin Psychopharmacol 2015;30(2):67–74).

Overall, vilazodone’s efficacy is similar to that of other modern-day antidepressants, which is not particularly high. The number of patients needed to treat (NNT) to achieve a response with vilazodone that wouldn’t have been seen with a placebo is 8, compared to 4–16 for other antidepressants—with a lower NNT indicating greater efficacy (Citrome L, J Affect Disord 2016;196:225–233). Whether vilazodone can reliably bring patients to full remission is debatable. A meta-analysis suggests that 10% of patients achieve remission on vilazodone, but the only large trial that reported remission rates found it was no better than placebo (Khan A et al, J Clin Psychiatry 2011;72(4):441–447).

Vilazodone has never been tested in treatment-resistant depression, but two “switch” studies in patients who failed to recover after a trial of an SSRI or SNRI cast doubt about its ability to work when other antidepressants have not. Its long-term data are also uninspiring. Vilazodone failed to prevent depression in a large study that randomized patients who responded to the drug to either placebo or continuation. That is telling, since these “enriched” study designs usually favor the antidepressant (Chauhan et al, 2022).

With its resemblance to SSRIs and buspirone, vilazodone might seem well suited for anxiety disorders. However, its lack of FDA approval in anxiety disorders, despite industry-supported trials in generalized and social anxiety, raises doubts. Vilazodone did work in three large randomized controlled trials of generalized anxiety disorder (20–40 mg/day, mean 31 mg/day), but the effect size was small and its tolerability was poor in this population, particularly with nausea and diarrhea (Zareifopoulos N and Dylja I, Asian J Psychiatr 2017;26:115–122). An industry-sponsored social anxiety trial was positive, but the study was small and the dropout rate high. A larger follow-up study in social anxiety disorder was abandoned midstream.

When vilazodone was first launched, the initial data suggested the drug lacked sexual side effects. Later, we learned that most of the patients in those trials had nothing to lose, as their sex drive was already close to zero when they started vilazodone. While vilazodone did not lower their already absent libido, it did cause sexual dysfunction in those who entered the study with their sex drives intact (at a rate of 8% vs 1% on placebo). Later head-to-head comparisons with sertraline and paroxetine suggested that vilazodone carries a lower risk of sexual dysfunction than the SSRIs, consistent with the partially supported idea that buspirone treats SSRI-induced sexual dysfunction (Chauhan et al, 2022).

Overall, vilazodone’s tolerability problems are similar to those of the SSRIs, with transient nausea, diarrhea, dizziness, and more lasting sexual dysfunction and insomnia. There is no reason to think that vilazodone is free of more serious SSRI side effects like hyponatremia, osteopenia, suicidality, and withdrawal problems, but research into these areas is scant.

How to use it

Vilazodone dosing is relatively straightforward, with a few obstacles that are described in the table. For example, it needs to be taken with food—up to half the dose goes unabsorbed in a fasted state. On the other hand, potent CYP3A4 inhibitors, such as grapefruit juice, can raise vilazodone levels about two-fold.

Consider vilazondone in patients who respond to an SSRI but need an antidepressant with a lower risk of sexual side effects, and who do not respond to bupropion and vortioxetine (where sexual side effects are closer to zero). Otherwise, there are several reasons to avoid this antidepressant first line; tolerability, food interactions, and questionable benefits when it comes to preventing depression or treating comorbid anxiety disorders. 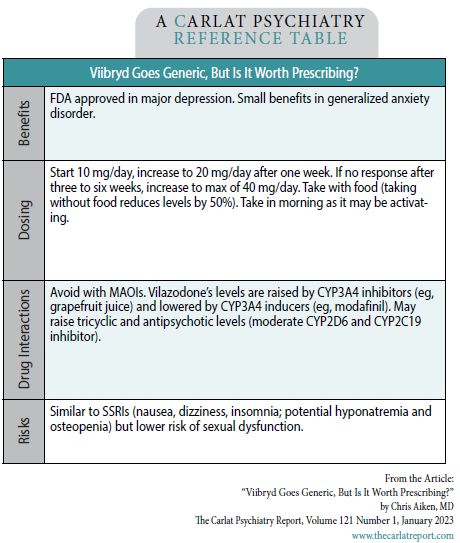