Home » From the Street to the Prescription Pad: Psychedelics Return to Psychiatry

From the Street to the Prescription Pad: Psychedelics Return to Psychiatry

Philip Wolfson, MD
From The Carlat Addiction Treatment Report
Issue Links: Learning Objectives | Editorial Information
Philip Wolfson, MD Director of The Center for Transformational Psychotherapy in San Anselmo, CA Dr. Wolfson has disclosed that he has no relevant financial or other interests in any commercial companies pertaining to this educational activity.
You’ve been treating Bob, a 37-year-old combat veteran with refractory PTSD, for the past 15 years. After two psychotherapists gave him a club drug, he returns to your office reporting he’s been symptom-free for two months. Jean, a 67-year-old woman you’ve been treating for anxiety associated with stage 4 breast cancer, tells you that after ­ingesting a hallucinogen, she feels at peace with her mortality. Sally’s depression didn’t respond to four different antidepressant trials, but after a half-dozen infusions at a trendy clinic, her depression is in full remission. Mike, whom you’ve helped in a struggle with opioids and alcohol for several years, reports reduced craving and months of sobriety after he began chewing dried bark imported from Africa. What do these patients have in common?

As marijuana has gained acceptance—it can now be prescribed to treat a wide variety of medical conditions in 28 states and Washington, DC—there has also been a shift in attitudes toward other mind-altering substances that, despite their reputation as drugs of abuse, show promise as therapeutic agents. Apart from outcomes that sound too good to be true, patients in the above vignettes share one common attribute: They received treatment using a class of street drugs—often referred to as psychedelics—that are undergoing clinical trials for treating a variety of psychiatric illnesses. Only one is FDA-approved and is being used off-label, while the others remain on Schedule I. In this article, I will provide an overview of the most promising psychedelic substances that are being investigated as treatments for psychiatric disorders.

Of or noting a mental state characterized by a profound sense of intensified sensory perception, sometimes accompanied by severe perceptual distortion and hallucinations and by extreme feelings of either euphoria or despair
—dictionary.com

MDMA
3, 4-methylenedioxymethamphetamine, also known as “ecstasy,” “Molly,” or “Adam,” is a stimulant first synthesized in 1912. MDMA is well known among users for producing feelings of empathy and connectedness. Prior to being made illegal, it enjoyed brief popularity as an aid to couples therapy and for the treatment of depression and trauma in the early 1980s (Wolfson P, Journal of Psychoactive Drugs 1986;18(4):319–328). In my experience, many couples who shared 4–6 hours of a guided MDMA session attained new understanding and compassion for themselves and their partners. Unfortunately, MDMA is now frequently adulterated and street users generally don’t know what they are getting. Early on in the rave scene, it was implicated in a number of deaths related to dehydration-induced hyperthermia.

When taken under medical supervision (as in the FDA-approved Phase 2 protocols), MDMA has a clean record of safety and benefit and has generated great interest in its use for veterans with PTSD, given the epidemic of suicide and disability in this population (Mithoefer MC et al, J Psychopharmacology 2013;27(1):28–39). Today, the Heffter Research Institute and the Multidisciplinary Association for Psychedelic Studies (MAPS) are conducting Phase 2 clinical trials for treatment-resistant PTSD, social anxiety in patients with autism, and anxiety associated with life-threatening illnesses (see this issue’s expert Q&A for an in-depth look at MDMA-assisted psychotherapy for treatment-refractory PTSD).

Psilocybin
Psilocybin mushrooms—also known as hallucinogenic mushrooms or “shrooms”—are illegal to possess, but spores and growing kits can be purchased legally online. Those who ingest them experience visual hallucinations, distortions, and synesthesia (a melding of senses in which users “see” sounds or “taste” colors). Medical research with psilocybin—conducted at Johns Hopkins and NYU—has focused on anxiety related to life-threatening illnesses such as cancer (Griffiths RR et al, J Psychopharmacol 2016;30(12):1181–1197). In these studies, subjects ingested psilocybin during one or two sessions in a comfortable, non-medical setting in which they were supported by staff trained to deal with the impact of life-threatening illnesses. For many subjects, the response was dramatic: At 6- and 12-month follow-ups, they reported enduring relief from fear of relapse and death. Some subjects reported a sense of spiritual, emotional, and social renewal as well (Mithoefer MC et al, Lancet Psychiatry 2016;3(5):481–488). Psilocybin is also being considered as an experimental treatment for depression, alcoholism, and tobacco use disorder (see the table on page 3 for more information about experimental uses of psilocybin and other psychedelic drugs).

LSD
Lysergic acid diethylamide, the prototypical psychedelic drug first synthesized in 1938 by Albert Hoffman, has been illegal in the U.S. since 1968—just a year after it attained celebrity status in the Beatles’ song “Lucy in the Sky With Diamonds.” But by then it had already been used in psychotherapy for over a decade, and its effects on depression, schizophrenia, personality, and behavior were described in numerous studies. (For a comprehensive review, see Grof S. LSD Psychotherapy. Pomona, CA: Hunter House Inc Publishers; 1980.)

Among LSD’s many psychoactive effects, a sometimes-problematic one is its induction of persistent visual and other sensory intrusions (Liechti ME at al, Psychopharmacology (Berl) 2016; Epub ahead of print). These have been memorialized in popular culture as “flashbacks,” and formally named in DSM-IV as hallucinogen persisting perception disorder (HPPD). One online survey found that HPPD may occur in up to 4% of LSD users (Halpern JH et al, Drug Alcohol Depend 2003;69(2):109–119).

There are no current studies in the U.S., but LSD-assisted psychotherapy research has resumed in Switzerland with a pilot study of anxiety in patients with life-threatening illnesses. Results suggested that when administered in a medically supervised psychotherapeutic setting, LSD can reduce anxiety in this population (Gasser P et al, J Nerv Ment Dis 2014;202(7):513–520).

Ketamine
Ketamine, known on the street as “special K,” is an NMDA-receptor antagonist that has been used since 1970 as a dissociative anesthetic and analgesic. When ingested, inhaled, or injected, it can produce feelings of euphoria, relaxation, and out-of-body experiences that have made it a popular “party drug.” Ketamine has been used in psychotherapy beginning in the late 1970s by practitioners seeking transformational experiences for their patients. Among the psychedelics, it enjoys the unique privilege of being FDA-approved, and this has facilitated research for psychiatric indications. The NIMH began pioneering the research of ketamine for treatment-resistant depression (TRD)—defined as treatment failure after two or more antidepressant trials—in 1999. Studies have aimed to produce minimal psychedelic effects while seeking to improve the antidepressant response by increasing the frequency of sessions and duration of overall treatment.

Clinics providing IV infusions under the supervision of an anesthesiologist (and occasionally a psychiatrist) are proliferating, as there are many people suffering with psychiatric disorders not successfully treated by conventional methods. Ketamine may be delivered in a wide variety of ways—IV drip, IV bolus, IM, intranasally, through the oral-buccal mucosa, orally, or even as a suppository. Regardless of the route, numerous trials show a response rate of 29%–80% among TRD patients who received at least a single dose of ketamine (Ann NY, Acad Sci 2015;1345(1):47–58). This means that half of TRD patients could theoretically achieve remission with ketamine. As a result, the drug is finding increased use as a first-line agent for depression, without waiting for treatment failure.

While ketamine is often administered for depression without a psychotherapeutic component, it is a “euphorogen,” and as such it is an ideal adjunct to psychotherapy. In my psychotherapy center, I titrate the dose using a lozenge formulation and aim to produce a trance state in which patients remain conscious, yet experience a “timeout” from their ordinary mental state for 25 minutes to 1 hour. This includes reduction in obsession and rumination, more difficulty accessing negative thoughts and feelings, and a breakthrough in compassion and understanding for oneself and others. Indeed, ketamine has been used for years by psychotherapists to produce transformative experiences. Patients report leaving form and emotional pain behind, and they often return to their normal state of consciousness with a different perspective. 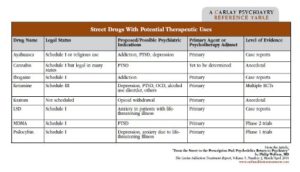 Ibogaine
Ibogaine is an alkaloid found in a family of West African shrubs known as iboga. It has both stimulant and dissociative properties, and was placed in Schedule I in 1970. In the 1960s, ibogaine was noted to have anti-craving effects that helped heroin addicts decrease their use. Small-scale research from the 1960s into the 2000s suggested a potential role in detoxification and treatment for substance use disorders, including opioids, cocaine, alcohol, and other drugs.

Unfortunately, ibogaine can dramatically prolong the QT interval, which can lead to potentially dangerous cardiac arrhythmias and sudden death. Between 1990 and 2008, 19 deaths were reported, many of them due to previously unrecognized cardiac disease. Subsequently, the risk of death from ibogaine has been estimated at 1 in 300 from arrhythmia, liver failure, and lethal interactions with other substances. Not surprisingly, research in the U.S. has ground to a halt, but ibogaine can be legally prescribed in New Zealand, and it is unregulated in Mexico and several other countries. Today, patients with substance use disorders can seek treatment at more than 20 ibogaine clinics around the world—if they’re willing to take the risk (Brown TK, Curr Drug Abuse Rev 2013;6(1):3–16).

Ayahuasca
Used for centuries by indigenous peoples of Amazonia to aid in religious ceremonies, ayahuasca is also known as “vine of the soul.” It isn’t a substance per se, but rather an admixture of plants containing N,N-dimethyltryptamine (DMT) and a potent MAO-B inhibitor that prevents DMT breakdown in the gut. Ingestion results in brilliant visual hallucinations, intense spiritual insights, and unpredictable emotional changes that can last up to 6 hours. In the U.S., ayahuasca is legal only for use in religious ceremonies by bona fide members of a religious faith called União do Vegetal. Potential adverse effects of ayahuasca include serotonin syndrome, especially when combined with serotonergic drugs such as SSRIs or SNRIs. A cottage industry has sprung up in Amazonia that offers psychedelic ayahuasca “tours,” and numerous testimonials have emerged attesting that ayahuasca “heals” PTSD (http://www.cnn.com/2014/10/23/opinion/veteran-ptsd-ayahuasca/). However, to date, there are no controlled studies demonstrating ayahuasca’s efficacy for PTSD or any other condition.

Kratom
Kratom is a powder made from the leaves of a South-East Asian tree (see CATR, January/February 2017, News of Note), and is known for its opiate-like and sedative properties, these emerging separately depending on dose ingested. Kratom can be addictive if used frequently and is a problem in several of these countries. It is most often used to reduce opiate withdrawal, as the main active molecules are selective full agonists of the mu-opioid receptor. Kratom is also used for analgesia, as a sedative, and as a mild anesthetic. Deaths have occurred from mixing it with other substances such as opiates. As of now, kratom remains unscheduled in the U.S.

Cannabis
MAPS has received regulatory approval to conduct a study of smoked marijuana for symptoms of PTSD in combat veterans. This first-time research seeks to demonstrate the safety and efficacy of smoked botanical marijuana as a prescription medicine for specific medical uses to the satisfaction of the FDA. Hindering marijuana research has been NIDA’s previous monopoly on the supply of marijuana for research and the DEA’s prior refusal to allow researchers to grow their own, which has restricted medical marijuana research for decades. On August 11, 2016, the DEA announced its intention to grant licenses to additional marijuana growers for research. This research is to be conducted in two medical settings—financed by research funds from the state of Colorado emanating from taxation on legal sales. As there is great interest in the potential for medical and psychiatric uses of marijuana, marijuana research can be expected to burgeon—depending on the federal regulatory response.

CATR Take: Although these are the major players in psychiatric research on psychedelics, there are legions of other psychedelic substances, and new ones are emerging all the time—some of which will undoubtedly come into clinical focus as well. However, until we have more robust evidence, the role of these substances in clinical practice remains to be seen.
Addiction Treatment
KEYWORDS practice-tools-and-tips psychopharmacology psychotherapy substance-abuse
Philip Wolfson, MD
More from this author