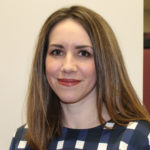 Rachel Vickers-Smith, PhD, MPH
Assistant Professor at University of Louisville, KY. Dr. Vickers-Smith has disclosed that she has no relevant financial or other interests in any commercial companies pertaining to this educational activity.

CATR: Could you start by telling us a little bit about yourself and your current work?
Dr. Vickers-Smith: I am an epidemiologist, and my work has primarily been on gabapentin as an emerging drug of recreational and unhealthy use. This interest came about while I was working for Dr. Jennifer Havens on her cohort of about 500 individuals in central Appalachia: the epicenter of the opioid epidemic. The cohort included individuals who mostly used non-medical prescription opioids. She had been following them since 2008, asking what kind of drugs they were using and how they were using them. In this group we noticed an uptick in people starting to report gabapentin misuse. From that stemmed a larger body of research trying to understand if this was unique to eastern Kentucky or central Appalachia, or if this was a much larger issue.

CATR: Fascinating. What do we know about the prevalence of gabapentinoid misuse?
Dr. Vickers-Smith: Gabapentinoids, which include the medications gabapentin and pregabalin, work by inhibiting voltage-dependent calcium channels (even though they are analogues of the inhibitory neurotransmitter GABA, they don’t bind to GABA receptors). In the general population, gabapentin misuse is uncommon. There’s been only one study to estimate overall population prevalence—in the United Kingdom—and that was 1%. But our research has shown that gabapentinoid misuse has a far higher prevalence among people with unhealthy substance use. Our best estimates are that between 15% and 22% of this population misuse gabapentin (Smith RV et al, Addiction 2016;111(7):1160–1174). And it’s possible that those are underestimates. Until recently, the research and clinical communities have not been asking about gabapentinoid misuse.

CATR: Has this evolved in recent years?
Dr. Vickers-Smith: In our cohort in eastern Kentucky between 2008 and 2014, we saw a nearly 3,000% increase in recreational use of gabapentin (Smith RV et al, Am J Psychiatry 2015;172(5):487–488). Almost certainly, that wasn’t unique to eastern Kentucky. That’s been observed throughout the country, as well. And we think that the prevalence is not falling. At most, perhaps at this point, it’s stabilizing, since across the country we’re seeing a lot of policy behind gabapentin scheduling and prescribing. There are 22 states that have scheduled gabapentin, are discussing scheduling gabapentin in their state legislature, or have noted gabapentin as a drug of concern and are requiring it to be reported to the prescription drug monitoring programs. This is an indication that we weren’t just looking at a flash in the pan, that there has been increasing misuse, and that we are now at the point where we’re needing to do something at a policy level.

CATR: Those are staggering figures. What makes gabapentinoids an attractive drug for some people?
Dr. Vickers-Smith: Yes, that’s the million-dollar question, because when gabapentin was released, it was presumed to have no abuse potential. However, we’re seeing two major reasons that people report gabapentin misuse (Vickers-Smith R et al, Psychol Addict Behav 2018;32(1):115–121). One is recreationally. The other is to self-medicate. When people use it recreationally, they report super-therapeutic doses and also typically use it with other substances. For example, they might break capsules in half and drink them with a cup of coffee or an energy drink, and it may give them the feeling of a speedball (ie, a depressant and stimulant together, such as heroin and cocaine). Others have said that they use it in combination with opioids to potentiate the high that they experience from the opioids, or to prolong the effect of the opioids. We’ve also heard people say that gabapentin may help them to achieve a high off of their methadone or buprenorphine treatment. These are all anecdotal, self-reported experiences. People have also reported misusing it with alcohol, marijuana, or cocaine.

CATR: You also mentioned it is often used to self-medicate.
Dr. Vickers-Smith: People have said that if they’re coming down off of, say, opioids, they can use gabapentin and it helps with the comedown. It also may help stave off withdrawal or alleviate the pain of withdrawal. Others have reported that they may not be able to access opioids for their pain anymore, so gabapentin has helped with their pain. Another thing to keep in mind is that, while people have reported that prolonged use has negative effects, they’re not as severe as for opioids. So, people may experience withdrawal from gabapentin, but it’s nothing like an opioid withdrawal—it’s more manageable and generally consists of irritability. It may not last as long. The fact that there are few negative effects, especially in comparison to other more commonly abused drugs, makes gabapentin more desirable. Finally, people report that it’s cheap and they’re nearly always able to get it. Those features have also facilitated the misuse of gabapentin.

CATR: You alluded to gabapentin’s interesting relationship with the opioid epidemic. How are gabapentinoids implicated in opioid-related deaths?
Dr. Vickers-Smith: Epidemiological evidence seems to suggest an interaction between gabapentin and opioids. We have seen an increase in opioid-related mortality in the presence of gabapentin. Presumably, gabapentin increases the risk of opioid-related overdoses by potentiating CNS and respiratory depression. Just in December 2019, the FDA issued a warning about gabapentinoids and has mandated that drug manufacturers go back to the laboratory and conduct clinical trials that evaluate the abuse potential of gabapentinoids, particularly in combination with opioids and paying special attention to respiratory depression. So, while early evidence and intuition suggest that this class of medications potentiates the CNS and respiratory depression that drives opioid-related overdoses, we need to go into the laboratory to understand what is actually going on and better understand the dose response, as well.

CATR: What can clinicians do to promote safer and more judicious use of gabapentinoids?
Dr. Vickers-Smith: First of all, simply being aware that there is abuse potential for gabapentinoids helps. Second, if prescribing gabapentinoids, consider if your patient is at risk for misuse or diversion. Finally, monitor for misuse. Are there escalating doses? Are there requests for early refills? Is there evidence of diversion? We also need to engage in conversations about the risks of fatal overdose when combining gabapentin and opioids. In a recent study out of Miami, researchers found that many people initiated gabapentin misuse in addiction treatment and transitional living facilities (Buttram ME et al, Drug Alc Depend 2019;204:107554). So, it may be that people are wanting to experience a high, but they don’t have access to their preferred drug of abuse.

CATR: Do we contribute to the problem by prescribing it so often?
Dr. Vickers-Smith: Because gabapentin is not federally scheduled, there aren’t as many barriers for patients to receive prescriptions as there are for other drugs of abuse. I’ve heard multiple stories of people going in and asking a provider for gabapentin and getting a prescription for it. Or, they have a family member who was prescribed gabapentin for something, and they just have lots of it lying around and so they can easily access it. In fact, the majority of gabapentin use is off-label—83% to 95% (Goodman CW and Brett AS, JAMA Intern Med 2019;179(5):695–701). So, there’s a lot of it out in the public and it’s easy to access. That’s certainly part of the problem.

CATR: How should we monitor use?
Dr. Vickers-Smith: Unfortunately, most often, toxicology screens for gabapentin are not used. They just aren’t requested, so that’s something to consider in monitoring misuse of gabapentin. We simply don’t understand fully the risks of gabapentin misuse and may be unaware when people are taking such high doses, beyond the recommended dosing range: People may be taking 4 or 5 pills, or 2,000 mg, at once (the maximum safely tolerated total daily dose of gabapentin is 3,600 mg). Also, we need to consider whether prescribing gabapentin is the best choice for an individual patient, because there has also been a review about gabapentinoids for non-cancer pain outside of their FDA-approved indications and there’s limited evidence for their effectiveness (Goodman CW and Brett AS, 2019); better evidence exists for other indications, including post-herpetic neuralgia and diabetic neuropathy. Certainly, we don’t want people’s pain to go untreated. We want to do our best in treating pain, and prescribers are faced with finding alternatives to opioids. The CDC has recommended gabapentinoids as a first-line alternative to opioids for pain. This is not a sweeping statement. Instead, we should go case by case and consider whether gabapentin is really the best treatment we have available for this individual.

CATR: You’ve been mentioning gabapentin a lot. What about pregabalin—do the two confer similar risks?
Dr. Vickers-Smith: There’s not as much out there about pregabalin misuse, just because it’s been scheduled since nearly right after its market release. So, given what we’ve seen, people may report using pregabalin, but not to the same extent. If they’re misusing it, it’s likely not to the same extent as gabapentin.

CATR: For patients whom we suspect are misusing gabapentin, do we have effective treatments available?
Dr. Vickers-Smith: At this point, we don’t. Because gabapentin is typically used with other substances, we don’t see a lot of people seeking just treatment for gabapentin addiction, per se. They may also be using opioids, alcohol, or benzos, which may be a higher priority for the patient and the clinician. Gabapentin may, also, be appropriately prescribed for the management of alcohol use disorder. So there is a lot to tease out there, and how to manage the unhealthy use of gabapentin is certainly an area that we need to explore.