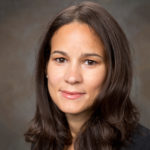 Sandra Gomez-Luna, MD
Clinical Assistant Professor at Yale University. Adult, adolescent, and child psychiatrist in Darien, CT. Dr. Gomez-Luna has disclosed that she has no relevant financial or other interests in any commercial companies pertaining to this educational activity.

CATR: Please tell us about your clinical focus.
Dr. Gomez-Luna: My principal role is within an organization called Behavioral Health Care, a behavioral health organization in Connecticut that serves a wide array of populations, from children and adolescents all the way to late adulthood (www.bhcare.org). We provide clinical services to communities for people with serious mental illness (defined as a mental, behavioral, or emotional disorder resulting in serious functional impairment) and substance use. I serve as the chief medical officer and medical director.

CATR: Serious mental illness may take center stage in the clinic. How do we make sure we don’t miss unhealthy opioid use?
Dr. Gomez-Luna: We absolutely should be screening people for opioid use disorders in this population. The key here is engagement. Naturally, people with serious mental illness may be difficult to engage or mistrustful of clinicians based on negative prior experiences, so effort needs to be made to establish the rapport.

CATR: How does this look in real time?
Dr. Gomez-Luna: I recommend starting with, “Tell me about your substance use,” and let the person freely express the kind of information or thoughts that they have about their substance use. You can then follow up with, “It’s important for us to know what your substance use is so that we can assess your needs and help you.” And that usually opens the door to better communication.

CATR: Are there any special considerations in treating opioid use disorder in the seriously mentally ill?
Dr. Gomez-Luna: When considering medication options for people with serious mental health challenges and opioid use disorder, we use the same treatment as we do for the general population with opioid use disorders: buprenorphine/naloxone (bup/nx), methadone, and injectable naltrexone. Some differences in the approach should be mentioned, however. Patients with serious mental illness may be more likely to be ingesting fentanyl and carfentanil, even without knowing it. And when patients may be using these very potent opioids, we may need to use microdosing techniques in introducing bup/nx.

CATR: Tell us more about microdosing buprenorphine/naloxone—why and how is it used?
Dr. Gomez-Luna: Microdosing bup/nx is also known as the Bernese Method. Here’s the rationale. Usually, when we are starting patients on bup/nx, we follow a standard induction procedure. This entails waiting for the patient to be in mild to moderate withdrawal before starting the medication—in order to prevent immediately precipitating withdrawal. While this works OK for many patients, there are patients who, for various reasons, will not be in withdrawal when they start the medication. Perhaps they have too strong of a physical dependence on opiates to consider going into withdrawal, or there may be other reasons.

CATR: So why would microdosing buprenorphine/naloxone prevent precipitated withdrawal?
Dr. Gomez-Luna: The theory is that a very small dose of bup/nx will not compete strongly enough at the opiate receptor to trigger withdrawal. And if you gradually give successive microdoses, over time, an increasing amount of the original opiate (eg, heroin or fentanyl) will be replaced by the bup/nx, without causing withdrawal. You can think of it as a kinder, gentler version of suboxone induction.

CATR: How is the microdosing procedure actually done?
Dr. Gomez-Luna: Let’s say you see a patient in your office who has been using fentanyl and wants to switch to bup/nx. His last use of fentanyl was several hours ago, and his Clinical Opiate Withdrawal Scale (COWS) score is 0, meaning he is not in withdrawal. Instead of the standard induction of starting with 2 mg of bup/nx and giving additional doses hourly, in the Bernese Method you start with 0.5 mg of buprenorphine no more than twice a day on day one, then 1 mg BID on day two, then 1 mg TID on day three. Meanwhile, the patient is allowed to continue his use of street opiates at a similar dose to what he is used to. Once he has comfortably reached 3–4 mg daily of bup/nx, you instruct him to stop the other opiates, and at this point you can often proceed with a standard bup/nx induction without withdrawal.

CATR: What about the maintenance phase in this population?
Dr. Gomez-Luna: A key here is that people with serious mental illness have a host of other challenges that require more support, such as housing needs and/or employment difficulties. So these patients are going to need not only therapy but also the wraparound services in order to maintain a recovery track.

CATR: What about medication interactions?
Dr. Gomez-Luna: These are important to consider. For example, carbamazepine induces the P450 enzymatic pathway and can decrease serum levels of buprenorphine. Methadone also interacts with some psychotropics, and you need to ask specifically about this medication since methadone doesn’t show up in most prescription monitoring program reports. For example, inducers of ­CYP3A4, such as rifampin, rifabutin, carbamazepine, phenytoin, and phenobarbital can reduce the levels of methadone, while fluconazole, fluoxetine, paroxetine, fluvoxamine, erythromycin, and ketoconazole are among the drugs that can increase levels of methadone via their inhibitory effect on the CYP3A4 enzymatic pathway. Some HIV drugs can exert pharmacokinetic interactions with methadone, usually through the CYP system, and increase methadone levels and effects. St. John’s wort and grapefruit juice may also affect plasma levels of methadone, and we usually educate patients not to use these while they are on methadone.

CATR: Are there any subpopulations among those with serious mental illness that have special considerations?
Dr. Gomez-Luna: Yes, young adults. This is a population very much in need of assessment and treatment and one that is very often missed. There are a significant number of young adults out there struggling with co-occurring conditions and serious mental illness who will not have access to treatment for opioid use. So we need to screen in the offices, screen in schools, and have information available for them so that if they want to access treatment confidentially, there will be a system in place to support that.